September 25, 2018 -- The latest version of Israel's Trophy defense system stopped more than 95 percent of roughly 300 missiles and rockets shot at it in Israeli tests this summer, laying the groundwork for US Army testing this fall on the 8x8 Stryker armored vehicle.

UPDATED testing details WASHINGTON: The latest version of Israel‘s Trophy defense system stopped more than 95 percent of roughly 300 rockets and missiles shot at it in tests this summer, manufacturer Rafael and its US partner Leonardo DRS claim. Those company-run tests in Israel were observed by US officials and lay the groundwork for US Army testing this fall on the 8×8 Stryker armored vehicle.

Rafael had already won US contracts to equip four brigades of M1 Abrams heavy tanks (one in 2018, three in 2019) with the original version of the Trophy, which combines radars, miniature rockets, and high-powered computing to shoot down incoming threats. But the Israeli company and its US partner, Leonardo DRS, have their sights on lighter-weight vehicles as well, which inspired them to develop a streamlined Trophy and put it through its paces in July and August.

That work put Rafael in pole position when the Army announced last month that it had rejected the US-made Iron Curtain it had been testing on its Stryker light armored vehicles and would consider other Active Protection Systems (APS). To no one’s surprise, Leonardo confirmed yesterday that Trophy-light will now be tested on Stryker.

Meanwhile, the Army continues to test a rival Israeli APS, a slimmed-down variant of IMI’s Iron Fist, on the middle-weight M2 Bradley. The Bradley’s cluttered turret and overburdened electrical system make bolting on new technology particularly tricky, and testing is behind schedule. If the Army decides it needs an alternative to Iron Fist, Rafael will again be the leading contender. In fact, this summer’s testing of Trophy-light took place on an Israeli-owned Bradley.

What’s more, “Trophy was actually tested on a Stryker by OSD (the US Office of the Secretary of Defense) back in the 2010 timeframe,” Leonardo executive Mike O’Leary told me in a phone call. But that was an earlier, “less mature” version of the lightweight Trophy, he said, and Rafael largely set it aside to focus on the full-size system for heavy tanks. In recent years, however, with the US Army urgently upgrading its Strykers to deter a Russian blitzkrieg in Eastern Europe, Rafael and Leonardo returned to the lightweight version and refined it into what they’re now calling the Trophy Vehicle Protection System (VPS).

That said, neither the Israeli company’s tests this summer nor the US Army’s tests this fall are looking at how best to install Trophy-light on a specific vehicle, not yet. For now, they’re just doing what the Army calls “characterization,” basically making sure the system’s components all work together as advertised.

To make sure Trophy-light works as well as the full-size original, Rafael did “over 250 live scenarios” testing different aspects of performance against different combinations of incoming threat and environmental conditions. (You don’t want your active protection system trying to shoot down raindrops or going blind in a dust cloud, for example). Some of the scenarios required a single shot, but some involved multiple shots, O’Leary told me, estimating that there were about 300 shots taken.

The threats ranged from the ubiquitous shoulder-fired Rocket Propelled Grenades (RPGs) to larger and faster Anti-Tank Guided Missiles (ATGMs), O’Leary said. UPDATE While he was reluctant to provide further details, O’Leary said the testing proved the reduced-weight Trophy VPS “performed to the same level or better” than the full-size Trophy HV — and the HV has successfully defeated a wide range of threats, not only rockets and missiles but also recoilless rifle rounds and even High-Explosive Anti-Tank (HEAT) rounds fired from tank cannons.

But, as is typical for Active Protection Systems, the threats all relied on explosive warheads, which don’t go off properly (or at all) if you hit them hard enough.

It’s much harder to stop solid shot, which has no explosive inside because it gets its destructive power from the sheer force of impact, which means there’s nothing in the incoming round to break. Fortunately, solid shot is much rarer. No missile in service can deliver enough kinetic energy, so kinetic threats only come from the main gun of a main battle tank, which are much less common than missile launchers even in great power militaries. (For example, in American armor brigades, every M2 Bradley has a missile launcher, but only the M1 Abrams has a high-velocity, big-bore cannon). Still, with Russia working to update its huge inherited fleet of Soviet tanks, solid shot would be a serious threat in major war. Some companies have said their Active Protection System can defeat such Kinetic Energy (KE) penetrators — IMI, notably, says its full-size Iron Fist can knock KE rounds off-course so they impact at a less effective angle — but such claims inspire much skepticism.

Rafael hasn’t made any such claims about defeating KE threats, yet, but O’Leary told me that “we are working on it.” In fact, he said, the Rafael-Leonardo team is actively pursuing multiple defenses against everything from solid shot to “top attack” missiles that target the thinner armor on top of a tank (like the US Javelin), roadside bombs and mines that attack from underneath, jamming that tries to blind a vehicle’s sensors, and even chem/bio warfare threats.

The goal, O’Leary said, isn’t to slap on a different countermeasure for every single threat. While any one single-purpose system might be simple, the accumulated weight and power would be prohibitive for even heavy vehicles, while the bewildering variety of gear would be overwhelming for even well-trained crews. (Even the largest, most complex tanks, like the 70-ton Abrams, have room for only four crew).

Instead, O’Leary told me, “everything has to operate holistically.” A single system able must address multiple threats simultaneously, switching modes automatically, with some kind of artificial intelligence to assist the crew. But that vision is still years away from reality. 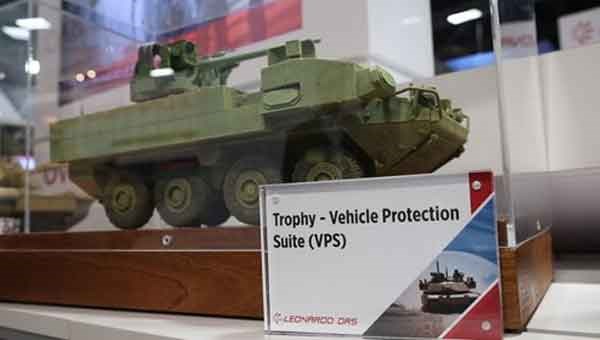 Learn about the world's first and only fully-operational, combat-proven active protection system.