October 2019 -- If there’s one thing that Army leadership agrees upon, it’s the need for improved survivability of soldiers and machines against modern anti-tank weapons like the Russian Kornet and Chinese HJ-8 guided missiles, as well as Russia’s tandem warhead RPG-29 rocket propelled grenade that can bore a hole into a tank with a molten jet of metal. These weapons are readily available, inexpensive, and easy to use, which has led to proliferation in combat zones in Iraq, Syria, Libya, Lebanon, Gaza, and throughout Africa and Asia. As such, they pose serious threats to U.S. armored vehicles.

To counter those weapons, American efforts have evolved beyond passive, steel and ceramic plates that encase armored vehicles—and which are most effective against bullets, artillery fragments, and underbody mines—to active protection systems (APS) that  augment passive armor by destroying RPGs and missiles in flight before they strike their target. These initiatives extend from retrofitting existing vehicles like Abrams tanks with APS under urgent need acquisitions, to working APS into formal combat vehicle modernization plans under the Next Generation Ground Vehicle (NGCV) program.

“As threats became more lethal over the years, the answer was to add more and more armor, especially steel armor, to prevent penetration of the vehicle,” said Mike O’Leary, senior director of business development at DRS Land Systems. “We’re now at a tipping point where combat vehicles simply can’t get any heavier or they’ll be unable to maneuver, traverse bridges, or be transported. As we saw in Afghanistan and Iraq, the weight of some of these vehicles caused roads to give way leading to rollovers.

“With APS you don’t necessarily have to add more armor plate to an existing vehicle, and when developing a new vehicle you can reduce the amount of armor required depending on the threat. That gives you a lighter, more mobile and nimble vehicle because you’ve offloaded some passive armor in exchange for an active system.”

Israel was the first to experience the increased lethality of modern anti-armor weapons during the 2006 Israel-Lebanon War where its armored formations were basically brought to a standstill by just a few anti-tank guided missile teams hidden in the rocks in the Lebanese Bekaa Valley. The country faced advanced anti-armor weapons again during the 2014 Gaza conflict. In response, Leonardo DRS’ partner Rafael Advanced Defense Systems of Israel developed a system called Trophy that is arguably the most battle tested APS in the world with more than 1,500 systems installed on the Merkava MK4 main battle tank and all major Israeli ground combat platforms.

In 2018, the U.S. Army began contracting with Leonardo DRS to provide the same Trophy system for M1 Abrams Main Battle Tanks under an urgent needs basis. In 2019, Leonardo DRS was awarded another contract to provide both the Army and Marine Corps with additional TROPHY active protection systems, bringing the total funded value of the program to more than $200 million. And just this month, Leonardo DRS and Rafael delivered on time the first Trophy APS to the Army in a hand over that marks the first of several that will ultimately outfit four brigades of tanks.

For this work, Leonardo DRS, Rafael, and the vehicle manufacturer were charged with making the APS work on vehicles already maxed out in terms of interior space and power. O’Leary didn’t sugar coat the challenge.

“As compelling as Trophy is in terms of enhancing the survivability of a platform in a very lethal environment, the true challenge is actually fitting it on the platform from a size, weight, power, and cooling standpoint. It’s no secret that the Abrams tank and others like the Bradley have been augmented with significant engineering changes many times over the last several decades. They just don’t have the weight or power budget available for another major subsystem.

“Speaking from experience on Abrams, that integration challenge was significant and it took time. Note that the challenge in fielding the capability was not dependent on the maturity of Trophy. The challenge was in integrating it correctly so the crew could still fight the tank, and it could be transported and maintained.”

In parallel, Leonardo DRS and Rafael are maturing a lighter weight Trophy Vehicle Protection System (VPS) that is aimed at smaller, lighter platforms like Stryker. Leveraging material and component upgrades, the VPS system has achieved a 40 percent weight reduction and improved power management while retaining its ability to protect against the full range of direct fire, anti-armor rocket, and missile threats.

APS typically comes in two flavors, hard kill and soft kill. Trophy is in the first category. A hard-kill active protection system detects, engages, and destroys or neutralizes an incoming threat before it can hit a protected vehicle, actively firing some type of projectile to intercept the threat.

In TROPHY’s case, the system employs actively scanned radar to provide continuous 360-degree protection of the vehicle. Army requirements demand that an APS must be capable of protecting vehicles under all conditions, and the radar is effective in adverse combat conditions like smoke, sand, dust, mud, glare, and explosions.

Once the threat is detected, the onboard computer classifies the threat and, if a hit is probable, the countermeasure launcher slews into position and launches a tight pattern of explosively formed penetrators that neutralize the warhead before impact or detonation. The threat detection, fire control, and processing all take place in milliseconds.

The same sensors that track incoming shots at the vehicle also paint a target on the shooter, allowing an immediate response from the crew. They can return fire, maneuver out of contact, activate slew-to-cue weapons and sensors, or call for fire support.  At the same time, Trophy automatically transmits the engagement data to the battle management network, giving friendly forces immediate enemy information.

There’s also a second method for hard kill that competing systems employ. In this case a detector identifies the threat and then launches a proximity fused mortar round at the target. The mortar blast defeats the threat with either an explosion or a blast pressure/blast wave that knocks the threat off course.

Soft kill APS defeats the threat without kinetics. Countermeasures include infrared jammers, laser spot imitators, and radar jammers. They may prevent missile guidance from remaining locked onto the vehicle, causing the missile to miss the vehicle target or prevent it from fusing.

Integrating APS will be less of a challenge when it is included in the clean-sheet design of an armored vehicle. That’s the plan of Army Futures Command, which is developing two new tanks, a fighting vehicle, and an armored personnel carrier under the NGCV program (as well as robotic vehicles that may or may not need an APS). Vehicle protection is one of the enabling technologies of the program, along with maneuver robotics and autonomous systems, directed energy weapons, and power generation and management.

The use of open systems architecture with plug and play capabilities is at the heart of Future Command’s efforts to shepherd a successful combat vehicle development program. To that end, it is leveraging the Modular Active Protection System (MAPS) effort, which is actually not an APS, but rather a modular framework and controller to integrate APS subsystems like sensors and hard/soft kill countermeasures. The expectation is that MAPS will help the Army respond to urgent threats by quickly introducing new technologies not tied to any vendor’s proprietary system.

NGCV program risk can also be reduced by melding and evolving proven technologies in areas like active protection and cyber/electronic capabilities with next-generation technologies in robotics, directed energy, and artificial intelligence. The Trophy system fits right into that philosophy.

“Trophy is combat proven, technologically refined, and well-developed,” said O’Leary. “Having said that, there are nuances and areas of modification that are identified in a system over time and that will lead to constant improvements and new capabilities. For future ground vehicle platforms, we are bringing forward improvements that we know will benefit both the system and the overall vehicle platform in a low risk fashion that still builds on the baseline of technical maturity of the Trophy system.”

Learn about the world's first and only fully-operational, combat-proven active protection system. 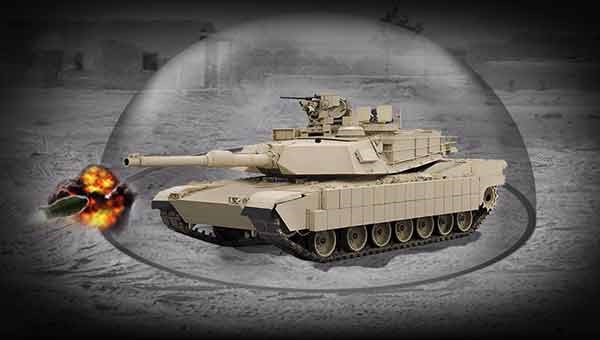