November 18, 2016 - Here’s the problem: Your unmanned aerial vehicle (UAV) is flying through densely populated geography when one of its signal intelligence (SIGINT) systems’ radio-frequency (RF) channels detects an emitter signal of interest on a specific frequency, indicating a potential target. It’s not enough to know there’s a potential threat out there somewhere. You need to know the threat’s exact location, and you need to know it in near-real-time. The challenge is that to geolocate a particular emitter, the SIGINT system needs to reassign three or four of its other RF channels, so they can – along with the original channel – perform the interferometry, using TDOA [Time Difference of Arrival] localization techniques, that’s needed to zero in on the potential target.

All of this means that during the geolocation process, those additional channels aren’t able to continue their own scanning of the electromagnetic spectrum (EMS) for other threats. For that reason, a SIGINT system needs to pack in as many RF channels, along with the supporting processing and high-speed networking, as the platform’s size, weight, and power (SWaP) envelope will permit.

Only a decade ago, a 6U board could typically only carry two RF tuner channels, while a 3U board was limited to a single channel. The good news is that times have changed. On the processing side, designers have recently seen the emergence of Intel’s Xeon Processor D devices. These devices enable a 20-time improvement in compute power compared to ten years ago by delivering supercomputing levels of compute power on 3U and 6U VPX boards. (Figure 1.)

Now, a comparable revolution in higher density RF tuner modules has begun. During the recent AUSA 2016 show in October, DRS’ Signal Solutions business unit introduced its new Vesper family of multichannel 3U and 6U wideband RF receivers. The 6U Vesper provides an amazing 9 RF tuner channels in a single 6U slot. Their 3U version supports two RF channels. What’s more, these RF receivers digitize the incoming analog data right on the tuner before sending it out for processing over 10 Gigabit Ethernet.

For SIGINT and ELINT [electronic intelligence] applications, these new open standards-based technologies represent a major breakthrough. Given the same SWaP envelope as they had a decade ago, system designers can now build systems that feature far greater electromagnetic spectrum coverage and the capability to locate many more targets simultaneously.

For example, at the high end it’s now possible to build a multichannel 6U VPX system that delivers 144 Intel processing cores and 54 RF channels using six Xeon Processor D-based modules and six of the new Vesper RF receivers. One or more 10/40 GigE Switch/Router cards can be used to share all that data across the system’s processing assets. This enables input data from the RF channels to be compared while simultaneously geolocating multiple emitters in space and time, and still provides plenty of remaining channels to handle ongoing scanning of the EMS.

The more channels that can be dedicated to a particular frequency, the better the resulting resolution and accuracy. This type of next generation SIGINT/ELINT system is able to support many different combinations of channel assignments, all of which can be modified dynamically and constantly. One subset of channels might be assigned to scan the entire electromagnetic spectrum while a second subset handles direction finding on a single frequency and another subset does direction finding on an entirely separate frequency.

Because these RF tuner and Xeon Processor D technologies are based on open-standards, they are also scalable. If a UAV has limited available power, or the system is destined for a compact electronic warfare pod whose physical height can’t support 6U cards, the existing application software doesn’t have to be rewritten. The same application software code and algorithms written for a high-end 6U architecture system can also be used in 3U systems for different programs and platforms with less forgiving SWaP envelopes or less demanding processing requirements.

Intel’s Xeon Processor D devices brought supercomputing level multi-core computing into the embedded space. Now, with the emergence of DRS’s Vesper RF receivers, system designers have a perfect match for taking advantage of that incredible level of processing. These solutions can deliver an unprecedented multiplier effect because of the number of RF channels that can now be deployed in a COTS system. Solutions based on these technologies will enable the warfighter to see more emitters simultaneously and geolocate those threats in near-real time without compromising the ability to continue scanning the electromagnetic spectrum for other targets. 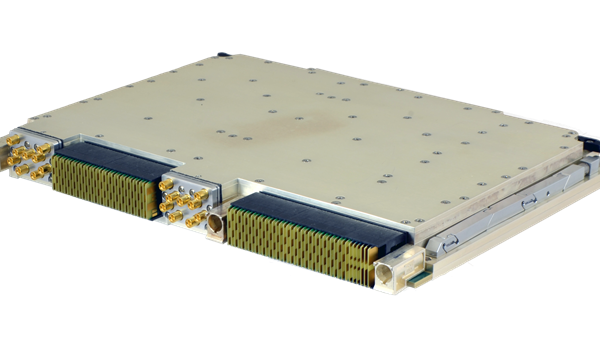 Vesper is a significant advancement in high-performance RF technology and dense channel packaging. Built with a modular approach in mind, Vesper can be configured with up to ten channels.

Visit the Vesper Family of Products