THE U.S. NAVY IS MOVING AT WARP SPEED TO DEVELOP SUPER LASERS

January 24, 2017 - Laser weapons will be developed through a three-phased approach in order to fire the weapon from destroyers at cruise missiles, drones, aircraft and small boats. The U.S. Navy is moving at warp speed to develop lasers with more lethality, precision and power sources as a way to destroy attacking missiles, drones aircraft and other threats. “We’re doing a lot more with lasers," Rear Adm. Ronald Boxall, director, Surface Warfare Division, said earlier this month at the annual Surface Naval Association national symposium. The Navy plans to fire a 150-kw weapon off a test ship within a year, he said. “Then a year later, we’ll have that on a carrier or a destroyer or both.” That’s quite a jump from the kw AN/SEQ-3(XN-1) Laser Weapon System (LaWS), which deployed in 2014 on the amphibious transport dock USS Ponce.

And the kind of power needed to power such a weapon won’t come with a simple flip of a switch.

“The Navy will be looking at ships’ servers to provide three times that much power,” says Donald Klick, director of business development, for DRS Power and Control Technologies. “To be putting out 150 kws, they (the laser systems) will be consuming 450 kws.”

That is more than most currently operational ships are designed to accommodate, at least when they are conducting other tasks. “Few power systems onboard ships can support sustained usage of a high-powered laser without additional energy storage,” noted a recent Naval Postgraduate School paper titled “Power Systems and Energy Storage Modeling for Directed Energy Weapons”.

The paper said, “The new DDG-1000 may have enough electrical energy, but other platforms … may require some type of ‘energy magazine.’ This magazine stores energy for on-demand usage by the laser. It can be made up of batteries, capacitors, or flywheels, and would recharge between laser pulses.

The energy magazine should allow for sustained usage against a swarm of targets in an engagement lasting up to twenty minutes. The DDG 1000 is built with what’s called a total ship computing environment, meaning software and blade servers manage not just the weapons systems on the ship but also handle the radar and fire control software and various logistical items such as water, fuel, oil and power for the ship, industry officials said.

The ship’s integrated power system, which includes its electric propulsion, helps generate up to 78 megawatts of on-board electrical power, something seen as key to the future when it comes to ship technologies and the application of anticipated future weapons systems such as laser weapons and rail guns.

The ship’s electric drive uses two main turbine generations with two auxiliary turbine generators which power up two 35-megawatt advanced induction motors, developers explained. Ideally, it would charge up as fast as it discharges, allowing for indefinite use (as long as there is ship’s fuel to expend).

Low maintenance, high safety, and long lifespan are other desirable characteristics. DRS Power and Control Technologies is one of the companies which is developing a specialized energy source. “We have enough for well over 100 shots before we go to recharge,” DRS’s Klick said during a break at SNA, pointing out there’s even a mode for continuous recharge.

“If you’ve got power this kind of power, you don’t go Winchester.” The DRS system uses a Li-Ion battery subsystem designed and provided by Lithiumstart housed in three distributed steel, welded cabinets that are 48” x 66” x 100” – although they are modular, Klick says, and can be arranged for a tailored fit. Each cabinet contains 18 drawers with 480 Li-Ion phosphate cells in each drawer.

The redundant power modules can provide 465 k each for a total of 930 kw. It can hold that full-power mark for about three minutes, Klick says – although most “lases” are normally of relatively short duration. An at-sea demonstration of the magazine is slated for 2018, Klick says, mostly with the 150-kw laser being developed by Northrop Grumman for the Office of Naval Research. The system still must go through rigorous Navy certification testing, Klick says.

He also sees the energy magazine as a candidate for other U.S. military units. “We’re looking at Air Force Special Forces on a C-130. You have to strike a car, but you’re worried about collateral damage. With that pinpoint accuracy, you don’t have to worry about collateral damage. You can just cause a car to stop running. There’s a lot more capability.”

A previously established 12-month, $53-million deal between Northrop and the Office of Naval Research will develop a Laser Weapon System Demonstrator through three phases; the phases include an initial design phase, ground-testing phase and then weapons testing at sea aboard a Navy Self Defense test ship, a Northrop statement said. “The company will design, produce, integrate, and support the shipboard testing of a 150-kilowatt-class solid state (electric) laser weapon system,” the Northrop statement added. “The contract could grow to a total value of $91 million over 34 months if ONR exercises all of its contract options.”

Office of Naval Research officials told Scout Warrior an aim of the developmental program is to engineer a prototype weapons for further analysis.

“The possibilities can become integrated prototypes -- and the prototypes become reality when they become acquisition programs,” an ONR official said. It is not yet clear when this weapon might be operational but the intention seems to be to arm surface ships such as destroyers, cruisers and possibly even carriers or an LCS with inexpensive offensive or defensive laser weapons technology.

“It is way too early to determine if this system will ever become operational. Northrop Grumman has been funded to set-up a demo to "demonstrate" the capabilities to senior leadership, who will then determine whether it is an asset worth further funding and turning into a program of record,” a Navy official told Scout Warrior. Both Navy and Northrop Grumman officials often talk about the cost advantages of firing laser weapons to incinerate incoming enemy attacks or destroy enemy targets without having to expend an interceptor missile worth hundreds of thousands of dollars. Navy officials describe this as getting ahead of the cost curve. "For about the price of a gallon of diesel fuel per shot, we're offering the Navy a high-precision defensive approach that will protect not only its sailors, but also its wallet," said Guy Renard, director and program manager, directed energy, Northrop Grumman Aerospace Systems.

As mentioned, the Navy has already deployed one laser system, called the Laser Weapons System, or LaWS, which has been operational for months. LaWS uses heat energy from lasers to disable or destroy targets fast, slow, stationary and moving targets. The system has successfully incinerated UAVs and other targets in tests shots, and has been operational aboard an amphibious transport dock in the Persian Gulf, the USS Ponce.

The scalable weapon is designed to destroy threats for about $59-cents per shot, an amount that is exponentially lower that the hundreds of thousands or millions needed to fire an interceptor missile such as the Standard Missile-2, Navy officials explained.

While at sea, sailors have been using the LaWS for targeting and training exercises every day and the weapon has even been used to disable and destroy some targets, service officials said. Navy sailors and engineers have discovered some unanticipated intelligence, reconnaissance and surveillance value from the laser weapons system by using its long-range telescope to scan for targets as well, Navy officials said. Laser weapons are expected to figure prominently in the Navy's future plans in several respects.

New Navy platforms such as the high-tech destroyer, the DDG 1000 or USS Zumwalt, is engineered with an electric drive propulsion system and extra on-board electrical power called an Integraed Power System. This system is in part designed to power-up ship electrical systems and accommodate emerging future weapons systems such as lasers and rail guns. "Laser weapons provide deep magazines, low cost per shot, and precision engagement capabilities with variable effects that range from dazzling to structural defeat against asymmetric threats that are facing the US Naval force," Beutner added.

In addition, laser weapons integrate fully into the Navy's emerging "distributed lethality" strategy aimed at better arming the surface fleet with a wide array of offensive and defensive weapons. 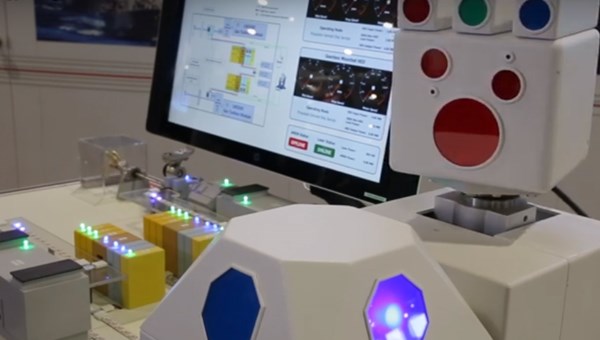 Energy Magazine integrated with Variable Frequency Drives and 1,000VDC in one cabinet to meet the demand for more power, higher power quality, and more efficient use of power.

What does a changing threat environment mean for the military-industry relationship?