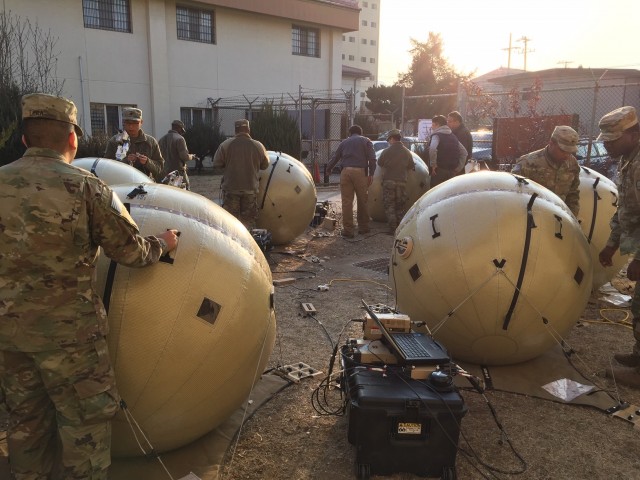 WASHINGTON: The Army issued a groundbreaking request to commercial satellite communications vendors about buying bandwidth as a “service” for its logistics specialists — a first step toward a potential sea-change in how DoD has traditionally done SATCOM business.

“It’s sort of leading the way,” Joe Welch, deputy director of the Army’s Program Executive Office Command, Control, Communications-Tactical (PEO C3T) told Breaking D in the run-up to this week’s Association of the US Army conference. “We don’t really do the ‘bandwidth as a service,’ right?,” he explained. “We’ll pay for very specific things. We’ll pay for a beam; and we’ll pay for our geographic coverage area; and we’ll pay for an amount of time; and we’ll pay for the channel. It’s not really along the lines of saying, ‘Hey, we just need we need to be able to turn this thing on and access’.”

As Breaking D readers know, commercial SATCOM providers have long urged DoD to move from buying bandwidth in fits and starts to contracts that resemble your average mobile phone or cable TV/Internet plan. Major SATCOM providers — such as Hughes (a subsidiary of SATCOM giant Echostar), Viasat, Intelsat, Inmarsat, SES and Eutelsat — argue that this would not only ease problems with service gaps that have long plagued troops in the field, but also be cheaper and allow speedier integration of new technology.

Further, the Space Force Vision for SATCOM says that in future some DoD bandwidth will be bought via a “managed service” model. (Indeed, Welch said the Army worked closely with the Space Force — as well as consulting industry leaders — in crafting the new RFI.)

“A portion of commercial SATCOM will be provided through managed services, providing flexible, cost-efficient (by-the-byte) support across multiple constellations, frequency bands, possibly orbits. In some cases, specific power-bandwidth for special user and legacy terminals will be acquired using multi-year, pooled-resource contracts when possible. Individual single-year leases will be rare and only used when no other options exist,” the vision document states.

Until now there has been little actual movement in that direction by DoD or the services.

The RFI is specifically aimed at the effort by the PEO C3T to integrate its stand-alone network for exchanging logistics data, called the Sustainment Tactical Network, into its wider tactical comms network for communications by combat troops in the field. The STN comprises “several thousand terminals that support our sustainment log community,” and is the “data transport layer for a lot of logistical applications,” Welch explained.

“The Sustainment Tactical Network (STN) is an effort to modernize the Army’s logistics network. STN could make use of commercial and military SATCOM to support resilient data transfer for the logistics community,” Paul Mehney, public relations director for the PEO C3T said in an email today.

“This RFI is being released to provide Army decision makers with a better understanding of existing capabilities, alternatives, or concepts that could enable the replacement of the current STN, providing/maintaining terminals (to include set-up and teardown), providing a help desk to address network access issues, obtaining Host Nation Agreements (HNA) for use of bandwidth, and technical support to users and VSAT system,” the solicitation says.

However, Welch said, it is not the only mission the Army considers ripe for a possible move to managed SATCOM services.

“That is one of several areas where we are looking at the potential for managed service,” Welch said. “There’s also maybe other ‘flavors’ of managed service, depending on whether we’re talking about a command post function or a vehicle function.”

Welch said the PEO C3T office has been talking to the commercial SATCOM industry about the concept for about a year. “We’re exploring, you know, a lot of new ways of doing business,” he said. “There’s a lot of interest I think on both sides, but I think the details are going to be important.”

In addition, he said, the Army is “really early in the experimentation phase” of how it might leverage the commercial broadband satellite constellations being launched into Low Earth Orbit (LEO) by firms like SpaceX, OneWeb and Iridium to provide 5G terrestrial wireless communications networks and expand the emerging Internet of Things (IoT). The PEO C3T is evaluating the technical capabilities of such networks, Welch explained.

The Army’s Command, Control, Communication, Computers, Cyber, Intelligence, Surveillance and Reconnaissance (C5ISR) Center in May signed a three-year, no-cost Cooperative Research and Development Agreement (CRADA) with SpaceX to jointly pursue research on potential applications of the firms Starlink broadband mega-constellations and terminals for mobile SATCOM. An Army spokesperson noted that the C5ISR Center also has signed similar contracts with OneWeb and Intelsat, as well as terminal providers Kratos, Wafer and RT Logic.

“And so I think we’ve first got to prove out these technical use cases. We’ve got to work the business use cases in parallel,” he said. “And so that’s where we’re going to start exploring the potential for things like terminal leases, managed service, and the contracting opportunities that we have.”

Leasing terminals provided by commercial SATCOM providers rather than the Army buying its own might make it cheaper and easier for the Army to get new technical capabilities into the field as they become available, he said. The idea is that the provider would simply replace old terminals when upgrades were made.

However, Welch cautioned, many commercial SATCOM makers currently tend to use “integrated” terminals that work only with their own satellite networks — which means that in order to have back-up capability to switch networks when one is unavailable (in the same way a smart phone flips among terrestrial wireless providers) requires having more than one terminal system.

(Indeed, as Breaking D readers know, the GAO found that DoD currently maintains 17,000 terminals that use “approximately 135 different designs.” Those terminals operate across diverse platforms—such as ships, backpacks, vehicles — and all have differing system requirements. Many can talk to only one type of satellite.)

“And, you know, from our perspective, what we really want to be able to give our users the ability to access anything that’s available,” Welch said. “And so we’re looking toward technologies — particularly antenna technologies, modem technology — that would enable us to be able to outfit command posts or a vehicle with the ability to take advantage of multiple different vendors’ services, and that can be a little bit more of a challenge.”

Being able to “hop” from one SATCOM network to another, especially in congested environments, is one of the central goals for “Fighting SATCOM” under Raymond’s vision document. It is also a foundational capability for ensuring the robust connectively that will be required for commanders to run future Joint All-Domain Operations now envisioned as the new American way of war.

Such capability is the wave of the future for all of DoD, as well as the commercial SATCOM business writ large, Rick Lober, vice president of the Defense and Intelligence Systems Division (DISD) at Hughes Network Systems, told Breaking D in a recent interview.

“We’re going to be looking at multi-satellite networks — you know, GEO, MEO, LEO —  multiple transport paths — maybe some of this will be terrestrial fiber maybe some of it will be 5g cellular in addition to satellite,” he explained.

Hughes, along with Kratos, was awarded a demo contract in 2018 by the Space and Missile Systems Center (SMC) for prototypes of a “flexible modem interface” that allows such network jumping. In September 2019,  Hughes was awarded a follow-on contract, worth $2.2 million, through the Space Enterprise Consortium (SpEC), to produce and demonstrate an “Enterprise Management and Control (EM&C)” prototype based on a flexible modem interface design.

Lober said that effort is now in its second phase, with Hughes and other companies demonstrating capabilities to shift between satellites, and eventually multiple comms networks including terrestrial networks, to the Air Force and the Army “very recently.”