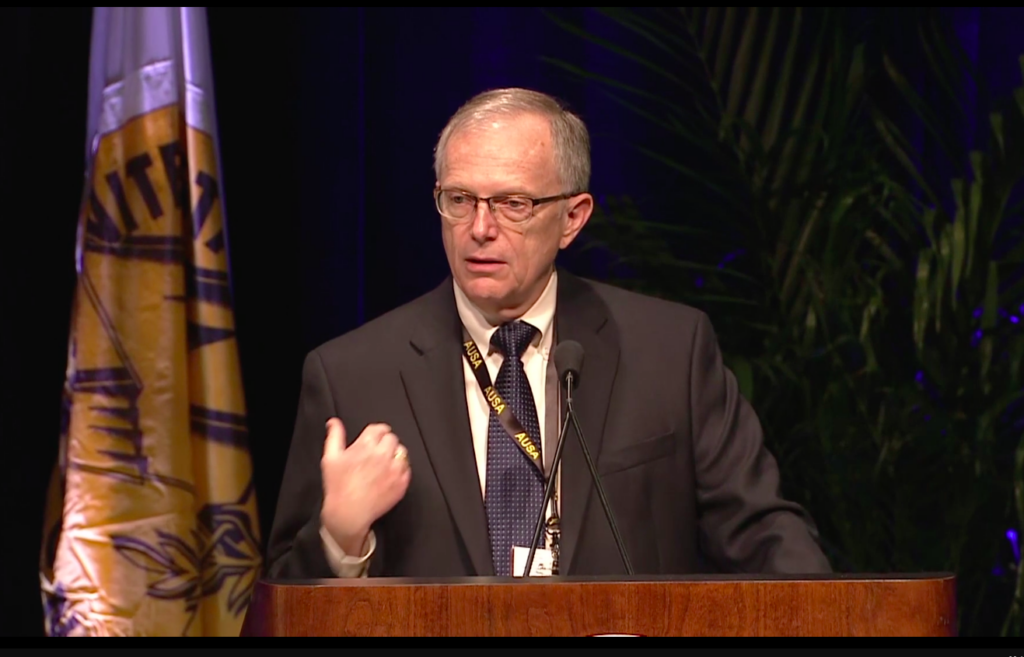 UPDATED WASHINGTON: Imagine a tank that can detect it’s being shot at and automatically alert other tanks in its formation, its defensive sensors feeding the threat location directly to the others’ weapons so they can fire back, the Army’s senior acquisition executive says. Or, Bruce Jette continues, imagine a laser weapon that automatically checks with friendly drones and aircraft to make sure they’re out of the path of the beam before it starts zapping an incoming missile.

But that kind of machine-to-machine exchange of data in near-real-time can only happen if all the vehicles and aircraft involved use compatible electronics, Jette told me. That’s not the case today – but Jette’s taking on the task of making it happen on future upgrades and new systems, at least across the Army. The Optionally Manned Fighting Vehicle to replace the M2 Bradley, he says, will be an early test case for the new approach.

There’s already been substantial progress that Jette seeks to build on, he said in an interview during the 2020 AUSA conference. For years, the military and industry have labored to define common technical standards for specific areas, like FACE for avionics and VICTORY for electronics on ground vehicles. This December, Jette told me, the Army will start trying to harmonize all those different standards together to form one meta-standard, a common Modular Open Systems Architecture for everything the service builds.

If Jette succeeds in unifying these different standards – and it’ll be far from easy – the resulting architecture could govern every contractor, official, and engineer trying to develop new weapons or upgrade existing ones. Getting a wider variety of weapons systems to use compatible electronics would also simplify the automated machine-to-machine exchange of data that is fundamental to a future Joint All Domain Command & Control network.

Jette’s goal is to define both “subsystems” – common components, such as radios, computers, even humble connector cables – that can go wide range of air and ground vehicles – and “super-systems”—ways for different vehicles to share data. Instead of focusing on each individual vehicle, aircraft, or other system as a self-contained box, each with its own uniquely customized components, the new emphasis is on what internal components and overarching connections those platforms have in common.

And instead of locking down a design, mass-producing it, and only then thinking about potential upgrades, Jette said, each ground or air vehicle will be able to constantly evolve. This, he said, will allow “continuous development” in which it’s easy to swap in new and improved components, as long as they meet the standards set by the open architecture. It’s like swapping one Lego piece for another: They may be different shapes and colors, but they still click together — in an infinite variety of shapes.

“We’re going to have the first meeting in December,” Jette told me. That summit will involve Army officials and experts working on different open-architecture standards, he said. That will set up ongoing meetings and a standing committee to start thrashing out how to make those existing standards more compatible.

Then in January or February, Jette continued, he’ll start bringing in representatives from the defense industry. “It’s not just going to be the Army saying what we want and then telling industry,” he emphasized. “Industry needs to be a participant in the process of defining what those standards are.”

Jette’s already had informal discussions with three CEOs of major defense companies, he told me, and they reacted positively.

But, I asked, why should they? After all, the time-honored business model for many contractors is to sell the government proprietary technology that none of their competitors can work on, which gives whomever sold the original product a de facto monopoly on maintenance, sustainment, and future upgrades. Open architecture is appealing for government officials, because they are no longer locked into one vendor but can look to multiple competitors for any given component, as long as all competitors meet the common standard. That eases upgrades and lowers cost to the government. But what’s in it for industry?

Strong companies see open architecture as an opportunity to make more sales, Jette replied. Today, if you sell a component to the Army for one particular program, it probably won’t work in any other program without modification. Maybe the targeting data will need to be output in a different format, for example, or the cable will need a different number of pins to plug in. But if multiple programs use the same open architecture standards, you can sell the same thing to any and all of them, and it should just plug-and-play. If you think your technology is best-in-class, that dramatically increases the number of competitions you can enter and win.

“If it’s an open system,” Jette told me, “your marketplace just blossomed.”