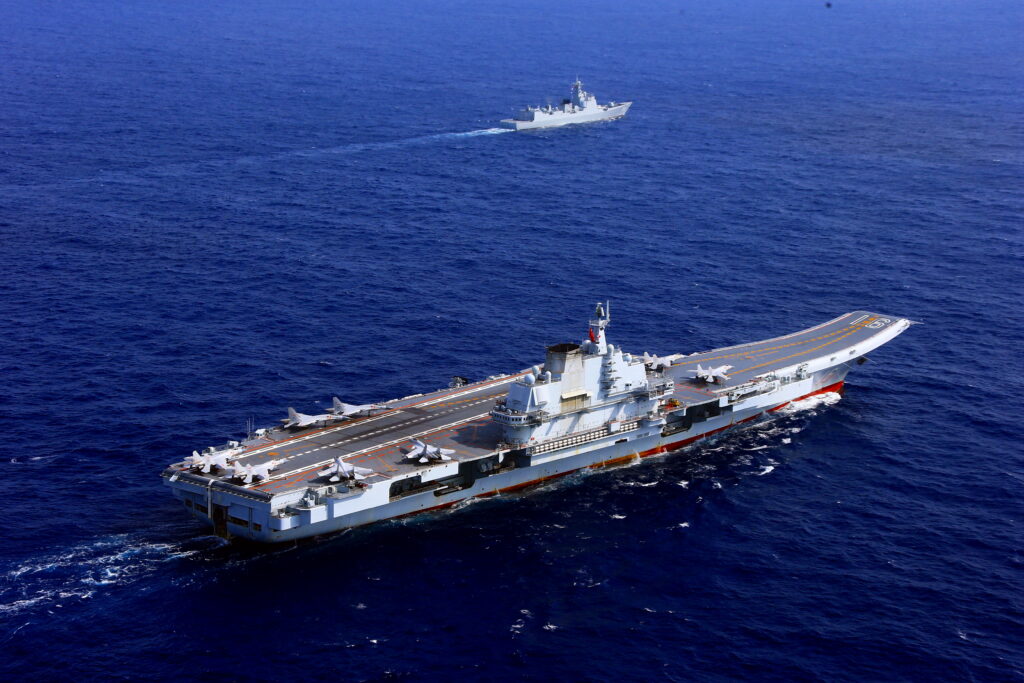 The aircraft carrier Liaoning and escort ships take part in a combat exercise in 2018.

WASHINGTON: China is operating the only aircraft carrier in the Western Pacific as the COVID crisis continues to ravage the USS Theodore Roosevelt in Guam, and the USS Ronald Reagan remains pierside in Japan.

The Liaoning carrier and its five-ship strike group skirted the territorial waters of Japan and Taiwan over the weekend, passing between the Japanese islands of Okinawa and Miyako on Saturday, before moving east of Taiwan on Sunday, according to reports. The move marks Beijing’s latest show of force in the region as its naval strength continues to grow and many US carriers sit moribund.

While the PLA Navy flexed its muscles, American and French nuclear-powered aircraft carriers struggled to contend with the global pandemic. The stricken USS Theodore Roosevelt continues to offload sailors to hotels on shore in Guam as it treats and about 600 infected sailors are quarantined. The ship has been in port for two weeks, and it’s not clear when it will return to sea.

On Monday, the Navy announced the first TR sailor died from COVID-related complications. Four sailors are hospitalized, and one has been moved into the intensive care unit due to shortness of breath, the Navy said today.

And France’s Charles de Gaulle carrier is now land-bound after 50 sailors tested positive for the novel cornaivurs, leading the French government to evacuate and isolate the entire 1,700-person crew in Toulon while a deep cleaning of the ship takes place. The de Gaulle — the only non-US nuclear powered carrier in the world — was coming to the end of a three-month deployment, but returned to port early.

Monday may have marked a turning point for how the Navy, and perhaps the Pentagon, copes with the pandemic. The news of the first death of a TR sailor, the de Gaulle’s evacuation, and the Truman extension came in rapid succession during the day, raising questions over how deeply the global pandemic will cut into military operations and what kind of toll it will take on military readiness.

Navy officials say it’s still unclear how COVID-19 made it aboard the TR. Many observers have pointed to its March 4 port call in Da Nang, Vietnam, blaming Capt. Brett Crozier for the visit. However, the port call had been signed off on by his boss’ bosses, Indo-Pacom commander Adm. Philip Davidson and Adm. John Aquilino, commander of the Pacific Fleet.

The visit was a major diplomatic milestone, marking just the second US carrier visit to the country since the US pulled out in 1975, and comes as Washington continues to make overtures to the country’s leadership as a bulwark against Chinese influence in the region.

Given the autonomy that Navy captains are given to control their ships, Crozier could have told his superiors he would not go, though it might well have cost him his command. There’s good reason to doubt the Da Nang visit was the source of the infections since the guided missile cruiser USS Bunker Hill tied up at the pier at the same time and she hosted the vast majority of visits by local officials, Navy officials say. No sailors from the Bunker Hill have tested positive for COVID-19. The TR stayed offshore, anchored in Da Nang harbor, and received relatively few visitors. However, it did require small boat transfers to and from the ship and pier.

“All scheduled events in Da Nang were reviewed for potential COVID risk and additional support was provided by the host country to screen local participants at these events as well,” Pacific Fleet spokesperson Lt. Rachel McMarr told me in an email.

The next supercarrier to demonstrate the American presence in the Pacific is USS Nimitz, which began embarking sailors at the beginning of April to isolate them and keep the virus off the ship. But the Nimitz, now in Bremerton, Wash. is weeks away from deploying.

There is a big deck ship laden with Marine Corps-operated F-35Bs sailing in the region, however. The amphibious ship USS America (which is a carrier although the Navy won’t call it one) is currently operating in the East China Sea after participating in exercises with the Japanese Defense Forces, according to the ship’s Facebook page.

Monday also saw the announcement of a dramatic move meant to keep sailors from possible infection. The Navy has ordered the USS Harry S. Truman carrier strike group to cruise the Atlantic for at least three more weeks, extending their planned seven-month deployment to keep her sailors isolated from the general population.

“The ship is entering a period in which it needs to be ready to respond and deploy at any time,” said Vice Adm. Andrew Lewis, 2nd Fleet commander. “Normally we can do that pierside, but in the face of COVID-19, we need to protect our most valuable asset, our people, by keeping the ship out to sea.”

The Navy said it would provide an update to the crew’s families in three weeks.

“We would love nothing more than to be reunited with our friends and families,” said Rear Adm. Andrew Loiselle, commander of Carrier Strike Group 8. “We recognize that these are unique circumstances and the responsible thing to do is to ensure we are able to answer our nation’s call while ensuring the health and safety of our Sailors. We thank you for your continued love and support as we remain focused on this important mission.”

The Truman finally deployed in November after suffering electrical problems just before it was scheduled to deploy in September. The rest of the ships in its strike group deployed on time as a surface action group – comprised of the destroyers USS Lassen, USS Farragut and USS Forrest Sherman, and the cruiser USS Normandy. The entire group was able to move through the Mediterranian and into the North Arabian Sea in December, as one of two carrier strike groups coiled to strike Iran if tensions continued to rise. The Truman group in recent days returned to the Atlantic.

Extending the length of ship deployments, even by weeks, has been a major issue for the Navy’s inability to get them out of maintenance visits on time, and effects on the readiness of crews who miss time at  home and critical on-shore training. It’s not yet clear how long the Truman and its complement of destroyers and cruisers will remain at sea, but the carrier has now had two deployments without a significant pierside overhaul, increasing the likelihood it will be in dock at Norfolk for some time.