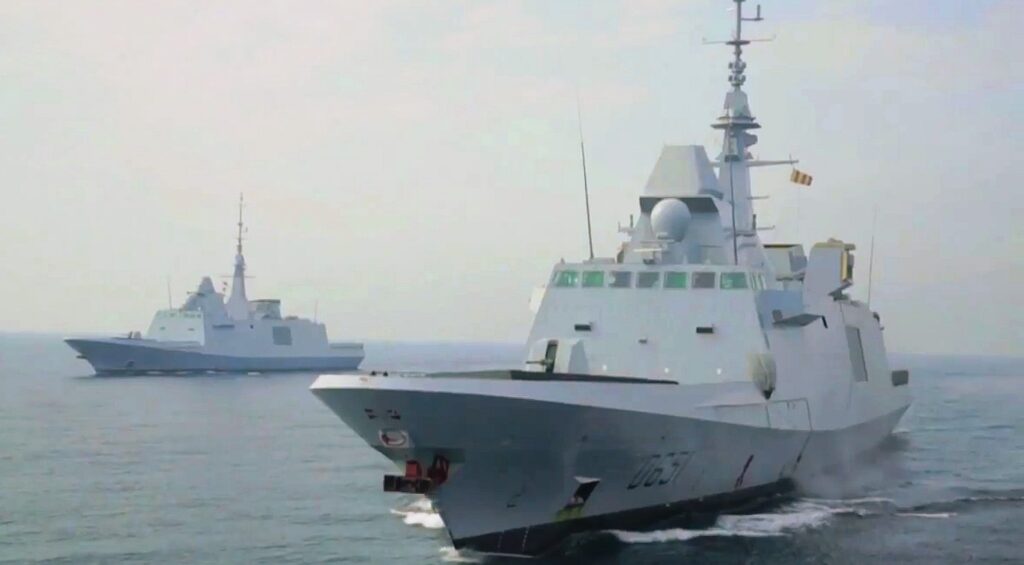 WASHINGTON: The Navy awarded Wisconsin’s Fincantieri Marinette Marine a $795 million contract to build the first 10 of a new class of guided missile frigates today, giving the shipbuilder a major win in a hotly-contested competition seen as a lynchpin of the service’s emerging modernization strategy. Contracts for the 10 ships will be worth about $5.5 billion.

The frigate competition is a first look at how the Navy is envisioning a fleet that is smaller, faster, and can strike at distance, as Pentagon leaders expect more encounters at sea with a rapidly growing Chinese navy vying for supremacy in the Pacific. With Russian vessels also becoming more active in the Black Sea, Mediterranean and the Arctic, the new class of ships will be counted on to play cat-and-mouse with two advanced adversaries. The aim is a vessel more capable than the controversial Littoral Combat Ship — built by Marinette and Austal — but less expensive than a full-size Aegis missile destroyer.

The win assures more work for the company’s Wisconsin shipyard, which is building the last several mono-hull Littoral Combat Ships along with a version of the LCS for Saudi Arabia. It also assures Fincantieri a place in the top tier of US shipbuilders, with both the LCS and now at least 10 frigates in the fleet.

The company offered its FREMM design, currently in use by the Italian and French navies.

Navy acquisition chief James Geurts said the Navy hasn’t locked in its acquisition strategy for the next 10 ships — if there are another ten — but as of right now it plans to recompete the contract after it awards the 10th vessel, giving competitors a chance to unseat Fincantieri.

Looking that far out in the future in a time of rapidly developing technologies and changing requirements is always dangerous, but Geurts said one of the defining factors in awarding the contract was the ability of the vessel to be flexible.

“Requirements include a lot of capacity for systems we have not yet designed,” Geurts said, “so we aim to always maximize our flexibility. That means we don’t have to pay a unique integration cost every time there’s a new capability.”

Plans call for the FFG(X) to be a small, multi-mission ship loaded out with the Aegis combat system, 32 vertical launch cells and the new SPY-6 radar system. The ship will be smaller than the Arleigh Burke destroyer, the Navy’s current workhorse, but outfitted with more power generation capabilities and advanced electronic warfare systems, along with radar and anti-submarine warfare gear.

“I see it doing multiple things, this is going to be a real workhorse supporting distributed maritime operations in the future,” Vice Adm. James Kilby, deputy chief for warfighting requirements and capabilities, told reporters by phone Thursday evening. “I can’t think of a better asset for a strike group for strike commander to give them the flexibility to do what we need to do in the future.”

Plans call for the first ship to cost $1.2 billion, with following ships falling somewhere between $800 to $950 million each, falling over time. Navy officials say the average cost at the end of the line will be $781 million per vessel.

In the running were Huntington Ingalls Industries, which was thought to offer a more lethal version of its Coast Guard National Security Cutter. There was also a joint effort between Navantia and General Dynamics Bath Iron Works with a version of its F-100 design. Finally, Austal submitted a version of its aluminum trimaran Littoral Combat Ship.

The loss of the contract will likely hurt Alabama’s Austal the hardest as its work on LCS runs out in coming years with nothing, as of now, to take its place.

Industry analyst Byron Callan of Capital Alpha Partners said in a note to investors this evening that “for other firms who competed for the program, we see mixed outcomes, presuming the decision is not overturned by a protest. Austal can still compete for smaller Navy and auxiliary vessels. For General Dynamics Bath Iron Works and Huntington Ingalls, the DDG-51 program deliveries should run through 2030 per current Navy plans. Ingalls also will have amphibious ship work, though Bath Iron Works will deliver DDG-1002 in late 2022.”