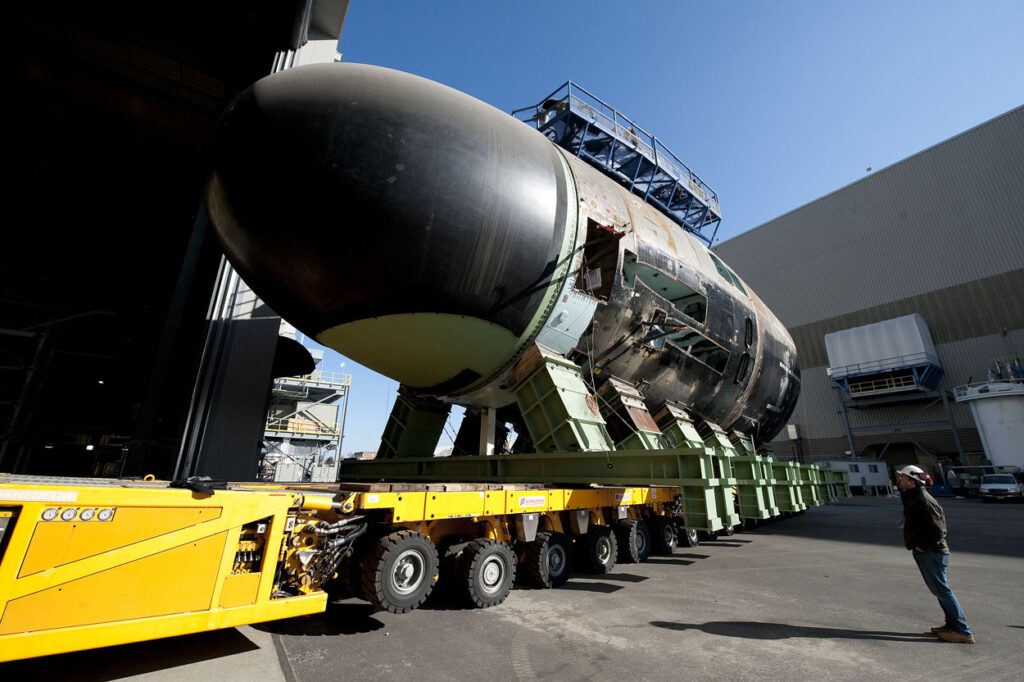 The USS Warner under construction in Newport News.

WASHINGTON: Navy leaders and defense industry execs are worried about the effect the COVID-19 pandemic is having on their supply chains, potentially interrupting critical repair and refit availabilities that could have knock-on effects on deployment schedules.

The Navy’s acquisition chief James Geurts told reporters recently that so far, industry is “holding pretty good on near-term milestones,” but he’s worried about long-term effects on ship repair and the industry’s ability to keep pace.

However, the pandemic seems to be having some beneficial effects.

“Part of my goal for our team is not to recover necessarily to where we were,” before COVID-19, but to change some fundamentals of how the Navy’s business gets done, he said. With most of the Navy acquisition force teleworking, “we’re basically 32 percent ahead on contract awards,” of where they planned to be at this point in the year. “And so, that means there are processes that are working much more efficiently now than they were before, so I want to capture those,” he said.

The Navy and shipbuilders are trying to do the same thing in the shipyards where “maybe different techniques will allow us to gain some efficiency while also creating some resiliency,” that will help weather any future disruptions and setbacks.

The big shipbuilders like Huntington Ingalls and Bath Iron Works are staggering shifts and allowing liberal leave and teleworking without suffering much disruption so far, company officials have said.

Geurts said the lessons they’re learning could lead to the conclusion that, “we cannot operate the way we used to operate, which had a lot of fragility and brittleness as we’re seeing right now. It’s got to drive to the way we need to operate in the future, which has to have resiliency for whatever disruption that might come up. That’s what we’re really trying to watch closely and think two or three phases ahead, and not just get caught up in managing today’s crisis.”

Even before COVID-19 tore through the global economy, the Navy was looking at ways to save money on repairing ships. Last month the service backtracked on plans for a classwide service-life extension project for its Arleigh Burke-class destroyers that would have added a decade to their 35-year service lives.

Not keeping the Burkes longer, and saving on their life-extension upgrades, would free up money for the Navy to buy more unmanned systems and other smaller ships to fit into plans Defense Secretary Mark Esper is making with Navy leadership for a smaller, faster, more stealthy fleet.

To that end, the service has been working on changing how it awards ship maintenance contracts, and is working to “bundle” multiple ship repair contracts together to give industry a more predictable work schedule, allowing them to plan long-term. “Ultimately, getting them bundles is the key to us being successful delivering these [ships] on time,” the commander of Naval Sea Systems Vice Adm. Thomas Moore said last month at the annual McAleese and Associates Defense Programs Conference.

Awarding several ship contracts at once will allow the shipbuilder to stockpile parts and arrange work schedules in a more efficient and rational manner, as opposed to the one-off, last-minute contracts the Navy has traditionally awarded for ship repair.

“Industry is rational. That’s what I tell everybody — you may not like every decision they make, but the decisions most always are very, very rational,” Moore said.

In the end, “we’ve got to manage our way through delay and disruption, but really focus on steepening the recovery and reinvention phase to get into the place we need to be,” Geurts said. “I think there are ways we can come out of this much more resilient, but you know it’s hard to change bureaucracy and institutional ways of doing business [to] make sure that this disruption doesn’t go to waste.”