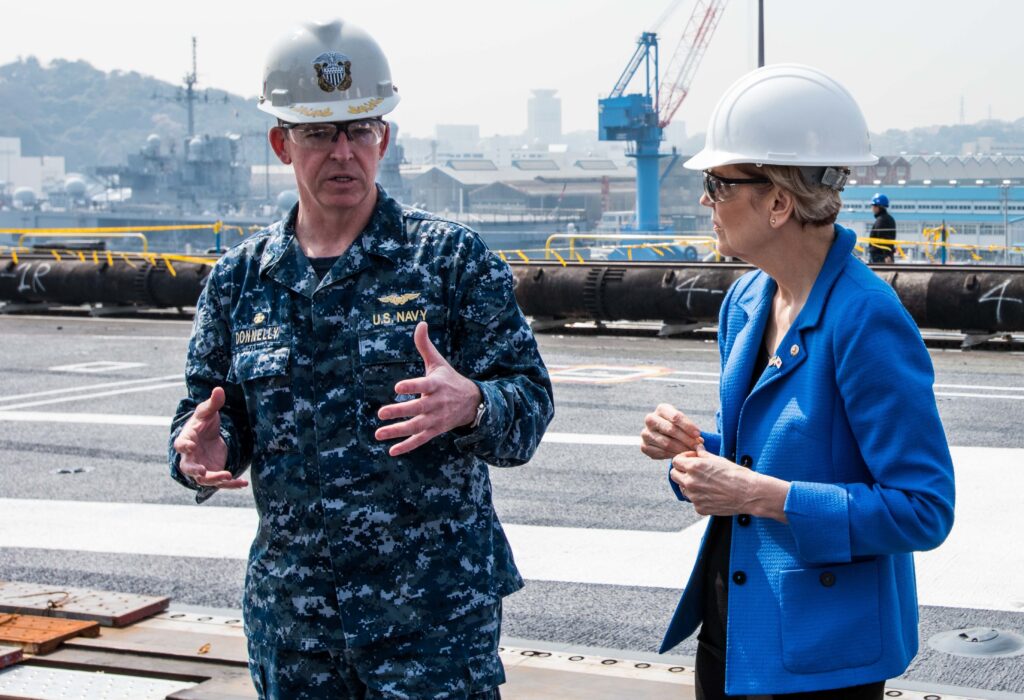 WASHINGTON: The Navy will resume posting the nominations and assignments of its flag officers, reversing course on a controversial 2019 decision to hide details of promotions based on what the Navy claimed was concern over its top officers’ safety.

Sen. Elizabeth Warren, former presidential candidate and member of the Senate Armed Services Committee, reminded the Navy it was violating the law in a recent letter. In response, Chief of Naval Operations, Adm. Mike Gilday, informed Warren that public postings will resume this week.

“The Navy must align itself with the rest of the Department of Defense,” Gilday said in the letter, obtained by Breaking Defense. “I value the need for transparency with the American Public and am grateful for your engagement on this matter.”

The Navy was alone in its conduct, with the other services posting new assignments. The decision was made by former CNO Adm. John Richardson out what he claimed was concern for the cyber security of its top officers.

Richardson’s decision spurred Warren to insert Section 510A into the 2020 National Defense Authorization Act language stating the armed services “shall make available on an internet website of such department available to the public a notice of such assignment or reassignment.”

In a statement issued today, Warren said “our Navy flag officers are often responsible for the lives of thousands of sailors, and the public has a right to know which officers are given this enormous responsibility. I’m glad the Navy has decided to comply with the law and resume these public announcements, and I’ll keep fighting for more transparency across our armed forces.”

Earlier this year, USNI reported that 30 Navy flag officers were confirmed by the Senate on March 20 without public notice. The promotions were for a slew of high-profile, public-facing positions that made little sense to keep secret, and would normally be celebrated by the other branches of the armed services. New leaders for high-profile Navy commands in Europe, the Atlantic, and the Middle East were on the list, as well as a new leader of Navy intelligence activities, and the head of the surface force development arm.

The Navy has yet to publicly acknowledge any of the nominations, which included current Vice Chief of Naval Operations Adm. Robert Burke taking leadership of Naval Forces Europe. Burke is leading the investigation into the firing of Capt. Brett Crozier, commander of the COVID-19 stricken USS Teddy Roosevelt.

Before Gilday’s about-face, Navy brass defended Richardson’s decision, despite internal complaints over what many saw as needless secrecy. In response to a Question for the Record following an Armed Services Military Personnel Subcommittee in Feb. 2019, for example, then-Vice Adm. Robert Burke held that that “limiting the public release of flag officer assignments and nominations is a first step intended to help flag officers secure their cyber profiles, which may be exploited by adversaries.”

Burke’s move to Europe is expected to be announced this week under the new policy.