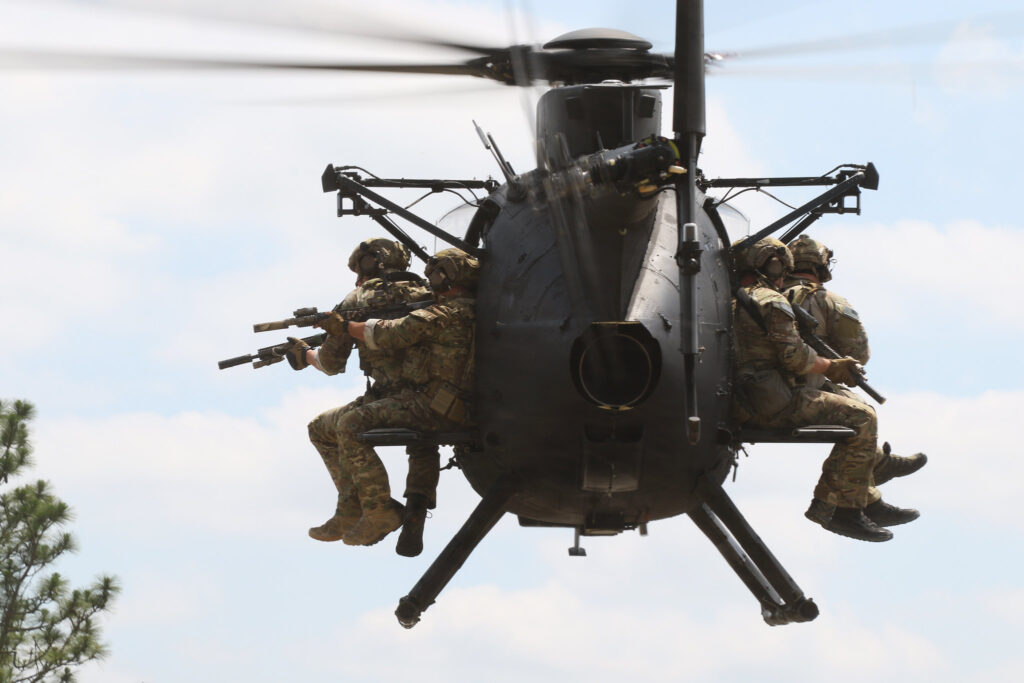 US Special Forces assault an objective at a training event.

WASHINGTON: US Special Forces engaged Russian troops in an hours-long roadside standoff in northeast Syria on Wednesday, an area long patrolled by US troops and their Kurdish allies.

The Russians have been probing the region near the Turkish and Iraqi borders for several years, most recently as they look to build an outpost to challenge the small American teams who continue to work in the area after President Trump pulled most US forces out of Syria.

This highlights an emerging fact of life for US special operations troops — an increasing amount of bleed between counterterrorism and the emerging mission to counter Russian and Chinese forces across the globe.

Chinese expansionism in the Pacific and continued Russian probing in Europe, the Middle East and Africa have commanders at the Special Operations Command grappling with how they should reset their force after two decades of kicking in doors in Iraq and Afghanistan.

“Going after [extremists] is not mutually exclusive to competing with great powers,” SOCOM commander Gen. Richard Clarke said last month at the SOFIC special operations conference. Countering Russia and China, he said, “is about influence, and SOF has a unique and valuable role in this…no longer can we just build counter-[extremist] capabilities that serve a single purpose.”

Any new technologies that would be effective against Chinese and Russian forces must also work in a counter-extremism fight, he said, “because the environments we’re going to be facing in the future are going to challenge our communication. They’re going to challenge our precision navigation. The unmanned aerial systems that our adversaries are using now globally, we have to look at methods that will defeat those and protect our forces.”

Clarke and his team of acquisition and program managers are keenly aware of the difficulties of finding weapons systems that can work in both the counterterrorism fight and against more high-end threats. ”As we look at the lethality, precision and mobility requirements as examples, we absolutely have to develop them so that they can compete and win with Russia and China,” he said.

Clark offered a telling example of how the situation has changed even in places like Afghanistan. When he first deployed there, he spent 90 percent of his time thinking about chasing and fighting Taliban forces.

But during a recent trip to the country, he discovered that commanders spend as much as 60 percent of their time working on information operations to influence the Taliban’s thinking, along with messaging and influencing the Afghan population. ”So, as we think about the information, how we do this locally, but also think about it regionally, it’s going to be critical to the US ability to be able to be successful in future fights.”

Preparing for that future means SOCOM must prepare for three wars simultaneously: a war on extremism, a war of influence, and a war for talent.

The fight against extremist elements will remain “a generational effort that SOCOM is going to be involved in for the long haul,” but, as the fight with ISIS in Syria shows, that fight can bleed into the growing contest with China and Russia in places like Syria, or several parts of Africa where both countries are increasingly operating.

The command’s top priority in developing new systems to meet the wider range of missions that SOF teams will be asked to undertake in the coming years is building a next generation intelligence, surveillance and reconnaissance capability, that “can provide the capability in both great power competition and working for our SOF teams in remote, austere, short take-off-and land battlefields,” Clarke said.

Part of that involves building out an overarching Joint All-Domain Command and Control (JADC2) effort.

The idea is to replace paper maps and acetate layovers with what SOCOM acquisition chief Jim Smith said would be a “single pane of glass” that would connect commandos with headquarters while providing both real-time information.

“That’s where we’re trying to get to with Mission Command, is to give a single pane of glass that gives what we normally would have called the enemy situation, the friendly situation, partner information, engineer, aviation, fires, all of that,” Smith said. “But then to put those SOF-peculiar layers on top of it that I would consider influence operations and things of that nature.”

That Mission Command effort will kick off as a formal program of record in the 2022 budget request.