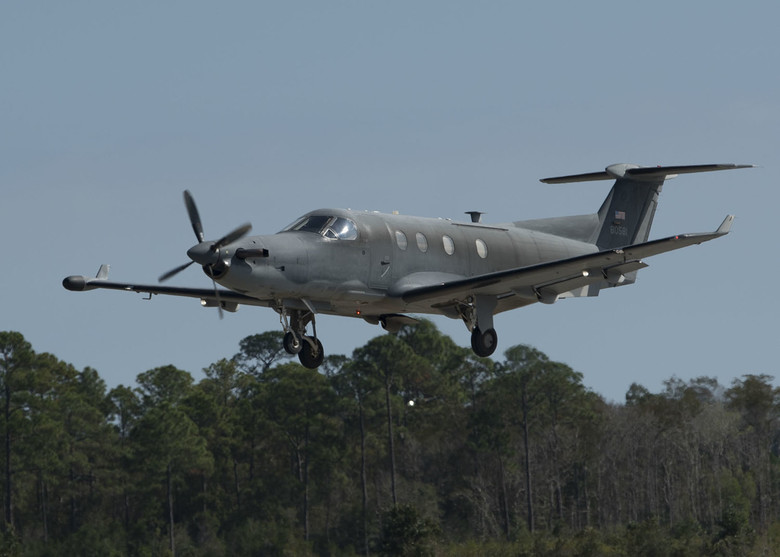 WASHINGTON: Given the fact that the global market for trainers is flat at best, and practically non-existent for light attack aircraft, the competition for Special Operations Command’s upcoming Armed Overwatch buy is likely to be fierce.

SOCOM has budgeted $106 million in 2021 to buy the first five of up to 75 Armed Overwatch aircraft to perform close air support for its troops on the ground, light attack and intelligence, surveillance and reconnaissance (ISR) missions. The planes would replace Air Force Special Operations Command’s current fleet of U-28 Draco aircraft.

Indeed, Teal Group’s January 2020 market analysis on trainers (not including supersonic aircraft) and light attack aircraft finds the total market worth only about $2 billion, compared to up to $30 billion for fighter jets.

“Having SOCOM do this with 75 planes to train with less capable allied forces almost makes sense, compared with the totally absurd idea of the Air Force buying hundreds as part of their force structure,” Aboulafia said.

He was referencing the Air Force’s on-again, off-again romance with the concept of buying up to 300 so-called Light Attack Aircraft to use for training, for close air support by Air Force Special Operations Command, and as strike aircraft for US allies involved in insurgencies such as Afghanistan and Lebanon. After almost a decade of dithering, the service finally in February made a final determination to buy only two each of the Textron/Beechcraft AT-6 Wolverine and the Sierra Nevada-Embraer A-29 Tucanos for continued experimentation.

SOCOM officials have stressed that the commands requirements are slightly different than those of the Air Force, focused more on mission capabilities than aircraft design.

And while at least one vendor expressed concerns about speaking with the press due to guidance issued to industry by SOCOM, Hawkins said the guidance used standard language asking vendors not to speak about SOCOM’s articulated needs with the goal of protecting ‘controlled unclassified’ information.

The program is slated to hold a prototype demonstration in November or December — a date that may slip, however, due to the COVID-19 pandemic.

In an May 18 interview with Breaking D, Textron Aviation Defense’s Vice President of Defense Strategy and Sales Brett Pierson stressed the fact that the Beechcraft AT-6E has already shown that it can perform the multiple missions envisioned by SOCOM by virtue of its participation in the Air Force’s Light Attack Experiment over the last several years.

“It already has the capability to do the kind of missions that SOCOM talks about,” he said.

The AT-6 has proven its chops in austere environments, Pierson said, both in landing on unprepared runways, and in the ability to rapidly refuel and re-arm.

“During Light Attack Experiment, one of the things we demonstrated was the ability to have pilots refuel the airplane, re-arm rockets, do a quick turnaround and take back off again,” he said.

In addition, Pierson pointed out, Textron Aviation Defense has customers all over the world , giving it an established supply chain, as well as manufacturing capability. According to a company fact sheet provided to Breaking D, the AT-6 has “85 percent parts commonality with the T-6” trainer, which “yields low risk, low cost sustainment, world-wide logistics, and low-footprint maintenance.”

On the other hand, newcomer to the competition Leidos argues that its new Bronco II has the advantage of being designed specifically with the SOCOM mission in mind. Leidos is partnering on Bronco II with the US arm of South African defense conglomerate Paramount Group (which manufactures the Mwari light reconnaissance aircraft), and aftermarket service provider Vertex Aerospace, based in Mississippi.

And the fact that the Bronco II is a prototype means its specifications can be altered more easily to fit exactly what the customer might desire, Richard Jackson, Leidos VP for Business Development & Strategy Airborne Solutions, Defense, told Breaking D in a May 19 interview.

“It allows SOCOM, from our perspective, to have greater flexibility in influencing the future of how the aircraft evolves,” he said. 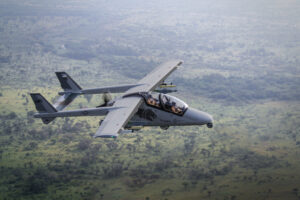 The aircraft design is optimized to meet SOCOM’s multi-mission profile, Jackson stressed, using modern, modular design approaches and open standards that ensure future subsystem upgrades are easily accomplished. It also has an “interchangeable conformal mission bay” that allows payloads to be rapidly swapped out by a couple of operators “in hours, not days.”

“Multi-mission is key word here,” he said. “It can do the surveillance and combat support and combat attack role simultaneously. That is something that SOCOM has touted and is not easily done.”

The Bronco II is built specifically to operate in austere environments, he said. For example, it can be rapidly broken down for transport — with one deconstructed aircraft fitting on a C-130 and two fitting in a C-17.

“It was designed from a clean sheet,” Jackson said, “purpose built for austere environments. That’s something that no other company can say.”

Neither Sierra Nevada-Embraer or Air Tractor were available for comment.

The A-29 turboprop not only has been involved in the Air Force’s Light Attack Experiment, but also used in combat by Afghanistan’s air force in the fight against the Taliban. And on April 17, the Sierra Nevada/Embraer team announced that it has successfully flight tested the first of 12 A-29s being built for the Nigerian air force.

Air Tractor had offered, with partner L3, the AT-802L Longsword back in 2017 during Phase 1 of the Light Attack Aircraft experiment, but lost out to the AT-6 and A-29 — with Air Force officials citing lack of an ejection seat as a factor. (Air Tractor last November filed a bid protest with the Government Accountability Office that was subsequently dismissed.) Air Tractor’s website now touts the multi-mission AT-802U, which the firm says can support ISR, signals intelligence, border/maritime patrol and remote supply/transport missions.