The urgent call goes out to a forward-deployed Air Force helicopter search and rescue team.  A pilot ejected from his aircraft during a nighttime close air support mission over a remote and dust-choked region of Afghanistan.

He needs an extraction and the conditions are not easy.  Enemy forces are in the area, its dark, and the uneven terrain will force the rescue team to hover, creating a degraded visual environment because of dust.

The Air Force HH-60G helicopter approaches its target with only moonlight to give visual clues of the ground.  The fine dust kicks up, immediately blacking out any light and visual clues for the pilots.  No horizon, no ground and no performance margin – they are essentially flying blind.  The crew is calm and focused.  Moments later the helicopter settles into a stable hover and the downed pilot is hoisted onboard as the helicopter departs without a problem.

While this seems like a far-flung movie scene, it is a scenario that helicopter pilots for the U.S.  Military and allied militaries face every day.  The loss of situational awareness in degraded visual environments (DVE), including black-out conditions over water, brown-out situations in dusty regions and white-outs in snowy regions, can present helicopter pilots with difficult operating conditions. 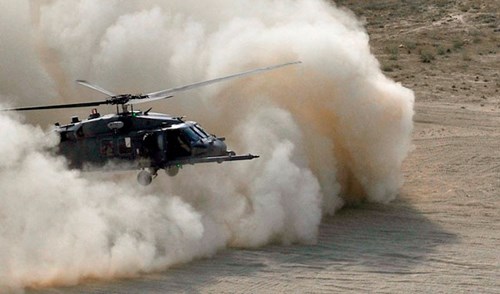 Air Force search and rescue helicopter crews commonly face these degraded visual challenges and are confident of mission success because of a low-cost technology that reduces a pilot’s flying burden in these, and other difficult conditions.

The technology is the Altitude Hold and Hover Stabilization (AHHS) system for military helicopters. AHHS has improved the safety of countless Air Force search and rescue flights since its installation in the early 1990s. The system gives pilots a reduced workload, improved and stable hover performance and has expanded the operational envelope of helicopters in difficult operating conditions. AHHS also brings improved safety, especially in degraded visual environments such as brown-outs, white-outs or nighttime operations over water.

The system works in three modes during different points of flight to remove burdens from the pilot.  In Hover Hold mode, the AHHS system drives the helicopter trim system actuators, relieving pilots from having to put as much of their focus on manually stabilizing the aircraft by adjusting velocity, position and altitude. The system maintains a three-dimensional, stable hover that significantly mitigates the risk of pilot disorientation in a degraded visual environment.

The AHHS system also aids pilots while the helicopter is in cruise flight. While a helicopter is flying from waypoint A to B, the H-60 trim system performs basic control functions such as holding the airspeed, heading and coordinated turns, but the pilot must maintain the desired altitude, making constant adjustments during flight.  With the AHHS system engaged, the pilot is freed from making constant altitude adjustments, essentially working with the existing flight control systems and giving the pilot a cruise control-like capability.

The third mode helps pilots land the helicopter, which is especially useful in degraded visual environment situations.  With the AHHS Descend/Auto-Land feature, a helicopter in position hold mode will automatically reduce the altitude at a controlled descent rate until the aircraft safely touches down on a programmed landing zone.

“Pilots using the AHHS system report that it has made a significant improvement in overcoming unknown and potential problems because of a degraded visual environment,” Aaron Hankins said.  “Employing helicopters in combat is a dangerous mission, but this system provides the aircrew with options to reduce pilot workload, increase safety and help ensure a successful outcome,” Aaron Hankins said.

The Altitude Hold and Hover Stabilization system has been installed on a number of helicopter platforms including the U.S. Air Force’s HH-60G Pave Hawk and MH-53M Pave Low.

Internationally, AHHS has a history of successful operations on the Israeli Air Force’s CH-53 and UH-60 helicopters, as well as the Republic of Korea Air Force’s HH-60P search and rescue helicopter.

A History of Success

DRS Technologies, a Leonardo-Finmeccanica company, started fielding this technology in U.S. Air Force search and rescue helicopters in the early 1990s.  The success of the technology over the years is reflected in commanders’ decisions to deploy only specific units with the AHHS capability installed.  That success in the field is also reflected in the fifth-generation systems that are currently being installed on all U.S. Air Force search and rescue helicopters.

Military pilots flying helicopters without the AHHS system have suffered numerous brown-out accidents since beginning of operations in the wars in Iraq and Afghanistan.  Casualties have occurred in degraded visual environments, where it becomes difficult to maintain situational awareness for pilots trying to manage many tasks to keep the aircraft stable.

One Marine commander put it this way:  “The price of outfitting all of my legacy helicopters with the AHHS system would cover the cost of a single helicopter destroyed if a pilot lost situational awareness during a dust-out landing attempt.”

The U.S. Army also has hundreds of legacy helicopters with years of life left in them that are in need of flight control system upgrades.  The low cost and proven successful operation of the AHHS system makes it an attractive option to U.S. Army officials looking for improvements in flight safety.

The U.S. military will keep flying missions, regardless of visual flight conditions, and as see-through sensors and synthetic vision technology continues to be developed. Yet, there will be a gap for pilots to help them operate in these difficult, yet necessary, degraded visual environments.   The low cost and easy installation of the proven AHHS system is an attractive option for commanders to reduce flight accidents in degraded visual environments for legacy helicopters for years to come. 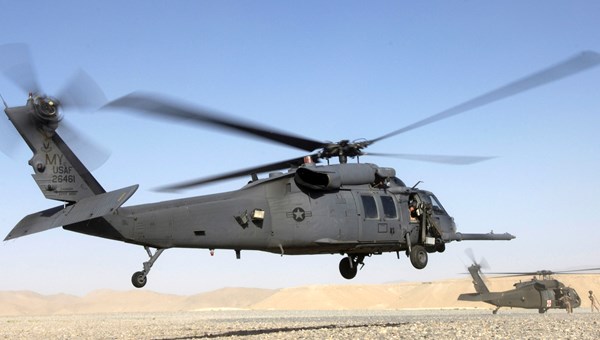