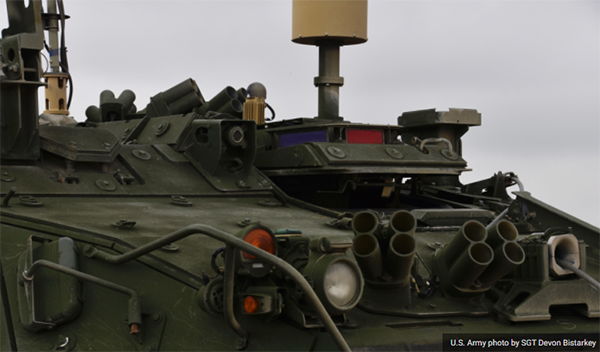 The proliferation of armed unmanned aircraft systems (UASs), also known as drones, presents a growing threat to maneuver ground forces, headquarters, logistics and critical infrastructure. This is particularly true for the explosion in the availability of small, increasingly sophisticated UASs. While the Pentagon has invested significant resources to address the challenge posed by medium and large drones as part of its air and missile defense program, it is only beginning to deal with the growing danger of small drones, particularly to military vehicles and dismounted formations.

One prominent Washington think tank described the challenge facing the U.S. military as that of “a drone saturated future.” More than 30 nations have either fielded armed drones or are developing them. Armed UASs, including so-called suicide drones, have figured prominently in Libya, Syria, the Caucasus, and Yemen. Non-state actors, such as the Islamic State, Boko Haram, Hezbollah, and the Palestinian Islamic Jihad, have employed UASs both to collect intelligence and attack soft targets. In 2018 defectors from the Venezuelan military attempted to assassinate the country’s authoritarian president, Nicolás Maduro, with explosive-laden, Chinese-made, commercially available drones.

The Wall Street Journal estimated that by late 2019 there were more than 30,000 Unmanned Aerial Vehicles in the world, with more in development and global production capabilities growing rapidly. China is the world’s leading exporter of military drones. The Chinese drone maker, DJI, holds 70 percent of the global market for commercial UASs.

Small UASs pose a growing threat to the U.S. military and a particularly difficult problem for national security. While they have limited payloads, this is sufficient to allow them to perform intelligence, reconnaissance and surveillance missions, conduct electronic warfare, and even carry sufficient explosive power to disable a vehicle or aircraft. Because they generally fly low and slow and are hard to see and hear, small drones are difficult to detect, track and target. In addition, they are extremely cheap platforms, challenging defense systems to find ways of defeating them without creating an unacceptable cost-exchange ratio.

The Department of Defense is finally addressing the unique challenges posed by small UASs. A Joint Counter-Small UAS Office (JCO) was stood up in January 2020, with the Army identified as the Executive Agent for the counter-small UAS (C-sUAS) effort. The JCO’s primary goal is to try and create order out of the Military Services' disparate efforts and bring order by trying to align Counter-Unmanned Aerial Systems (C-UAS) technology across the military to deliver “best of breed” capability for the joint force. Individual Services were assigned responsibility for unique C-sUAS portfolios: the U.S. Army is responsible for fixed/semi-fixed C-sUAS systems and the USMC for mounted C-UAS.

Currently, the Army is investing in capabilities to address both the large aerial vehicle and missile threat – through the Integrated Air and Missile Defense modernization program – and the small UAS challenge under the JCO. Dedicated air and missile defense capabilities, such as the Patriot air and missile defense system and the Initial Maneuver Short-Range Air Defense (IM-SHORAD) system, are generally well-suited to engaging the larger, higher-flying UASs.

When it comes to addressing the threat posed by small UASs, the Army currently relies on a hodge-podge of different capabilities, some hand-held, others mobile or fixed. About 90% of the U.S. military’s counter-drone capabilities are electronic warfare-type systems that use lasers or microwave-signal propagation to disrupt the communications link between user and device. The tendency was for each countermeasure to have its own sensor, effector, and command and control system. This why the JCO’s strategy is to pare down the number of systems to be deployed while pursuing a networked systems approach that will allow data from a variety of sensors to be shared through a single C2 structure.

In response to CENTCOM's urgent operational needs, the U.S. Army pursued a sophisticated small UAS defeat capability under the Low, Slow, Small UAS Integrated Defeat System (LIDS) program. One capability deployed by the Army in response to this urgent need is the Mobile-LIDS. The M-LIDS is deployed on two military vehicles: one that detects and tracks UAS threats using a combination of sensors, and the other that employs a variety of electronic and kinetic solutions, including a 30mm cannon and the Coyote small killer drone, to either jam the control signals of the small UAS or kill it. Another vehicle-mounted system deployed by the Army, but one that uses only electronic warfare means to counter a small UAS, is called Silent Archer.

Deploying dedicated counter-small UAS systems is not the answer for the long term. The Army cannot afford the people or equipment for a dedicated capability to protect tens of thousands of vehicles along with headquarters, bases and infrastructure. Instead, the military needs a non-dedicated capability, one that can exploit the array of sensors and effectors already being deployed on many military platforms. It makes no sense to deploy the sensors, weapons, and command and control for an active protection system to defeat anti-tank guided missiles (ATGMs) and not ensure that such a capability can also support the C-sUAS mission. Solutions must share information across all maneuver networks from distributed sensors to more rapidly identify threats and fuse information to both kinetic- and soft-kill effectors.

The Army should integrate counter-UAS technologies within a holistic approach to vehicle protection. It needs to integrate a mission equipment package that contains multi-mission technologies, such as radars that can identify inbound ground missile threats and the presence of UASs, into a network-enabled vehicle protection system. This way, threat information can be shared, improving unit situational awareness of both ground and air threats. Systems intended to counter drones and protect vehicles against other threats must include both kinetic and non-kinetic defeat technologies that minimize collateral damage and address emerging attack profiles such as drone swarms.

The most cost-effective and accelerated approach to meeting the Army’s needs is to design a vehicle-agnostic C-sUAS mission equipment package to fit on different vehicles such as Stryker, AMPV, JLTV, MATV, etc., that leverages tested C-sUAS technologies through programs like M-LIDS. A similar approach is needed to address the defense of fixed facilities from small UASs.