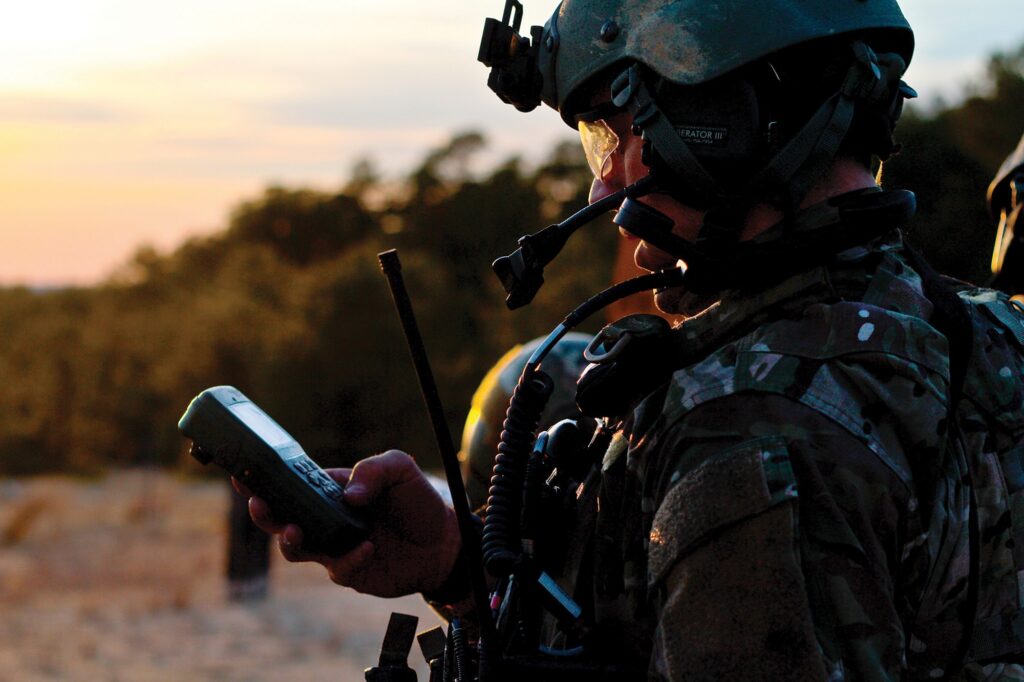 The Army is looking for next-gen systems to provide positioning, timing and navigation (PNT) data when GPS is jammed.

“We just did two days of S&T reviews on all this, which will inform the investment strategy for the Army,” he told Breaking D in an interview on the eve of the annual Association of the US Army show.

“Our efforts are really focused on the sensor-to-shooter [kill chain], providing situational awareness down to the lowest tactical level possible, and providing assured PNT [Precision Navigation & Timing] to the ground combat force. And so we’re focused on enabling that ground combat force to have really unprecedented access to space and space-enabled capabilities,” he added.

This work is part of a larger Army effort, launched in November by Army Secretary Ryan McCarthy, to map out its future space endeavors, an Army spokesperson said in an email. The Army’s Assured Positioning, Navigation and Timing Cross Functional Team (APNT CFT) — despite its name — is coordinating all Army space sector activities, not just PNT. This includes ISR; communications; PNT; and Battle Management Command and Control (BMC2) based on Low Earth Orbit (LEO) sats. It also includes the service’s effort to develop a common, mobile ground station under project TITAN (Tactical Intelligence Targeting Access Node) able to integrate sensors operating in all domains.

The Army is particularly focused on LEO-based systems, Webber explained, because of the advantages they provide in lowering the lag time in bouncing information between satellites and ground systems across multiple areas of operations. In addition, small LEO satellites — even in large numbers — are in general cheaper than the large, highly-capable satellites traditionally built by the Air Force and the Intelligence Community.

Webber said the Technical Center has somewhere between $13-20 million in its 2021 space budget. The work is focused on breakthrough sensor payloads in LEO for targeting long-range fires and providing alternative access to PNT signals in contested environments where GPS satellites are highly vulnerable.

The key word here is payloads, Webber stressed, saying the Army is not really interested in developing or even operating its own satellites.

The Army is also “absolutely coordinating”  with the Air Force, the Navy and the Space Development Agency (SDA) to leverage their sensor and proliferated LEO sat efforts, he said. While the services all have “a little bit different needs,” he explained, “in the end the same basic technologies or even satellites systems can be be put to a variety of different applications.”

“And so we are looking at a combination of hosted payloads and specific, small form-factor busses and payloads that can be put up and managed, not necessarily by the Army because the satellites can be operated and maintained by by anybody.  It’s a combination of all of those things to most affordably get the numbers of satellites up to provide the difference that we know they can make. And we’re looking at multiple ways to do that.”

One thing the Army is not looking to do, Webber noted, is to duplicate others efforts at missile tracking and targeting via infrared (IR) imaging. “We’re not focusing on that — IR or the visible sensing aspects of this. There’s a lot of folks out there that are doing that, and Army wants to leverage those capabilities.”

As Breaking D know, there are three signature programs for LEO sat payloads:

The Army over the past several years has experimented several iterations of classified satellites under this program. The latest effort, Gunsmoke-L, has been underway since November of 2018, when the Army awarded a two-year, $8.3 million contract to Dynetics to develop, test, integrate and demonstrate two so-called tactical space support vehicles. The end product will be a tiny experimental Cubesat.

“We hope to have Gunsmoke up, but at the about the end of this year,” Webber said. “Gunsmoke really contributes to the deep fight, and the long-range precision fires capabilities. With hypersonic weapons and these long-range strike penetration capabilities, it’s really hard to shoot something that you can’t see. So, it’s about how do you get that deep sensing capability. That supports, obviously, the Army who’s supposed to help kick in the door, and it also helps across the joint fight.”

He wouldn’t discuss the classified satellite’s specific capabilities. Since the Army isn’t developing electro-optical or IR payloads for ISR from space, a good guess would be that Gunsmoke is carrying a radio-frequency (RF) geo-location package. As Sydney has reported, the Army has been experimenting with such sensors — which use radio signals to trace back a target’s location — as an upgrade to the Precision Strike Missile. The builder and oeprator of America’s spy satellites, the NRO, issued its first contract to study RF geolocation late last year to startup Hawkeye 360.

Lonestar is designed to warn commanders about GPS jamming on the battlefield and to characterize the signals environment in a contested area so that the Army can overcome the problem and operate effectively, Webber explained.

“It improves our situational awareness of what is what is happening in the PNT and space world,” with an eye to Joint All Domain Operations (JADO), he said.

“We actually hope to have Lonestar, at least the first one or two of those, going up or early next year,” Webber said.

Polaris also is aimed at APNT, Webber explained, but its primary goal is to provide an alternate GPS capability in contested battle spaces. He was spare on the details of the program, except to stress that the oft-forgotten timing element in PNT is critically important for ADO.

The Technical Center also is “in conversations with SDA” on Polaris, he added. “They’re looking at that to potentially help them do some of their Transport Space Layer work.”