Battle For The Arctic: Russia Plans Nuke Icebreaker, US Counters China In Greenland 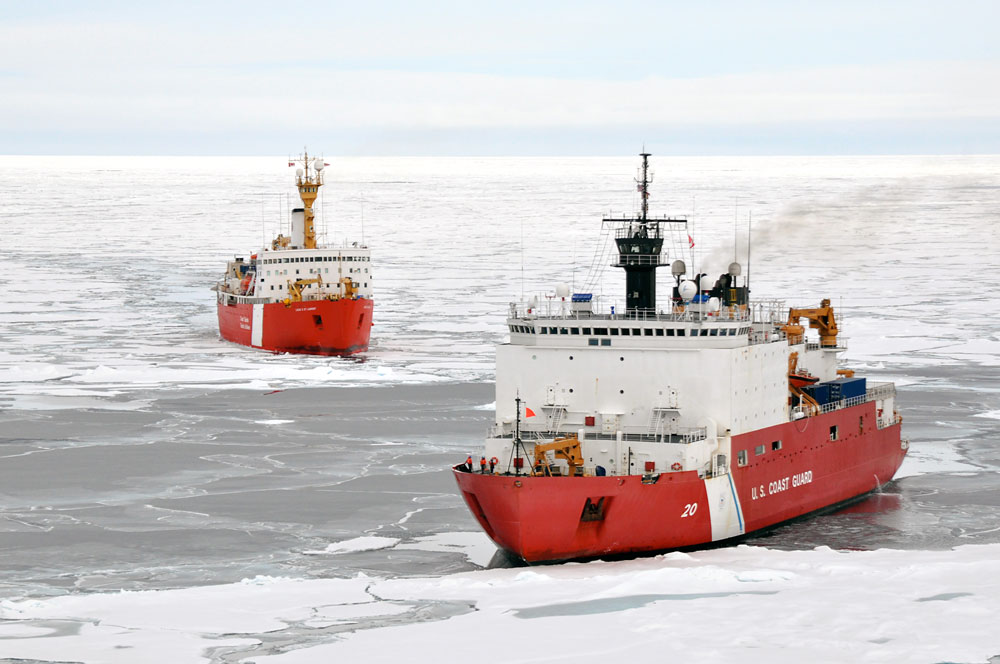 A Canadian Coast Guard vessel rendezvous with US Coast Guard icebreaker Healy (foreground) in the Arctic.

The deal was announced as Washington declared it is investing more money and diplomatic energy in Greenland to hold Chinese influence at bay. Meanwhile, two Chinese icebreakers returned home after a historic six-month deployment.

The Russian deal will see Atomflot, a subsidiary of Russian nuclear powerhouse Rosatom, and the Zvezda shipyard team up to build the first ship of a new Leader-class of nuclear icebreakers. The first ship is scheduled to be ready by 2027, adding a major new capability to the country’s existing 40 icebreakers. Moscow plans to build dozens more in coming years, including at least 13 heavy icebreakers, nine of which would be nuclear-powered, if plans laid out by Russian President Vladimir Putin hold steady.

The Russian icebreaker push fits within the new strategy for the Northern Sea Route released by Russia earlier this year, which called for modernizing four polar airports, building railways and seaports in the high north, and ramping up industrial scale exploitation of natural resources in the Arctic, particularly natural gas, oil and coal.

The next two Leader-class nuclear breakers are scheduled to head to sea in 2030 and 2032.

In contrast to the burgeoning Russian fleet, the US Coast Guard has one heavy icebreaker and one medium icebreaker, both built in the 1970s. There are plans to build six more breakers for the Coast Guard in coming years, but only the first two have any funding, and the first ship won’t be available until 2024.

During his State of the Coast Guard speech in February, Commandant Adm. Karl Schultz, called the situation: “a woefully unacceptable level of presence in an area where we must be a leading force.”

The fiscal 2020 budget submission included $555 million requested for the second of at least three polar cutters.

For its part, China has managed to match the US in the number icebreakers it can harness thanks to large investments over the past several years. Only one of the two was built domestically but Beijing has expressed a desire to float a nuclear-powered breaker at some point in the future, though plans remain unclear. The first ship, MV Xuelong, was built at a Ukrainian shipyard and has been upgraded twice by China.

In a significant milestone, the Chinese government said today Xuelong and the Xuelong 2 had returned to Shanghai after wrapping up the country’s 36th expedition to the Antarctic.

The two ships sailed more than 70,000 nautical miles during the six-month deployment, allowing scientists to survey the Ross Sea during the first Antarctic expedition undertaken by the two icebreakers at the same time. The Xuelong 2 is China’s first domestically-built icebreaker, and the voyage proved China can project forces over immense distances and sustain months-long operations at sea.

Chinese leaders have declared the country a “near Arctic nation,” a designation not recognized by the international community, and has talked about plans for a “Polar Silk Road” as part of its larger Belt and Road Initiative to open new trade and partnerships across the globe. Beijing has shown particular interest in Greenland, floating projects like building a research station, improving airfields, and establishing a satellite ground station on the island.

But Washington is determined to push back against those Chinese efforts and today unveiled a new aid package to the island to double down on American influence there.

“We can expect the rapidly changing Arctic system to create greater incentives for the Kremlin and the PRC to pursue agendas that clash with the interests of the United States and our allies and partners,” a senior State Department official told reporters Wednesday.

Under the new American effort, the US will open a consulate in Greenland and provide $12 million in development aid.

The official, who requested anonymity to speak about geopolitical tensions in the Arctic between the US and its two primary geopolitical rivals, added “we also are in the process of adjusting our Arctic policy to today’s new strategic realities, and those are characterized by the return of geopolitics.” The changes are driven, the official said, “by the desire of Russia and the People’s Republic of China to challenge the United States and the West.”