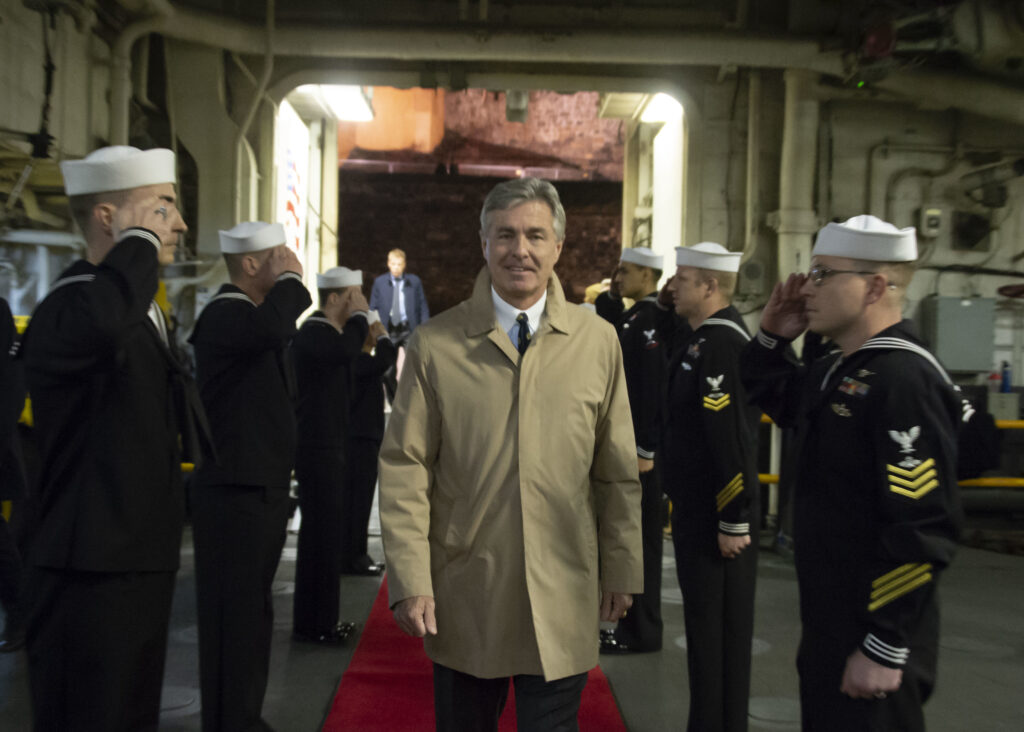 Kenneth Braithwaite, US ambassador to Norway, aboard the USS Iwo Jima in Oslo after participating in Trident Juncture 2018.

WASHINGTON: With defense budgets at risk of buckling under the strain of the soaring $24 trillion national debt, the nominees to lead the Navy and Air Force today still argued that both services need to grow by dozens of ships and hundreds of aircraft in coming years.

Given that uncertainty, there was one important moment during his testimony before the Senate Armed Services Committee this morning when Kenneth Braithwaite, a graduate of Annapolis, sought to project confidence.

After deadly collisions, firings, resignations, a string of SEAL scandals, and an initially stumbling response to the COVID-19 pandemic, the prospective nominee to be the fourth Navy Secretary in just six months, stated the Navy’s command culture is “troubled” — and he wants to fix it.

At the top of mind is the still unfolding drama aboard the USS Theodore Roosevelt aircraft carrier, which currently has over 1,000 COVID-19 cases among it’s 5,000 sailor crew, and the ongoing investigation into the  conduct of the Navy’s command in the Pacific theater.

“It saddens me to say, the Department of the Navy is in troubled waters due to many factors, primarily the failings of leadership,” Braithwaite, an Annapolis graduate, said. “They are all indicative of a breakdown in the trust of those leading the service.”

He was clearly taking aim at former acting Navy Secretary Thomas Modly, who resigned last month amid a firestorm of criticism over his firing of the TR’s captain, and flying to Guam to chastise the crew of the stricken ship for supporting their skipper.

During a two-hour hearing before the Senate Armed Services Committee that saw few policy challenges from members, and touched only lightly on modernization efforts, the nominees skated through questions about the direction of their services and how they planned to pay for expensive modernization efforts.

Perhaps the most interesting moments of the hearing occurred when the nominee to be the Navy’s top civilian, Kenneth Braithwaite, reiterated the view of current Navy leadership and Defense Secretary Mark Esper for the service to build out a fleet larger than 355 ships at some point in the future, but wasn’t pressed how that’s possible given current budget projections.

Likewise, Gen. Charles Brown, the Air Force chief of staff nominee, stuck with the service’s view that it needs to grow to 386 squadrons. “We still gotta be able to grow to 386. That’s the goal, anything less than 386 incurs risk,” he told the panel.

But current budget projections will make all of that extremely difficult, if not impossible.

The 2021 budget submitted by the White House earlier this year delivered no real growth, squeezing modernization efforts across all the services.

Last week, Defense Secretary Mark Esper said the department needs a yearly boost of 3 to 5 percent growth over inflation in order to meet the needs of the National Defense Strategy. In his written responses to questions, Braithwaite stood behind that number, saying flat budgets “drive hard budget choices and risk in delivering a balanced force.” For the Navy, “the simple fact is that a fleet of 30 percent more ships is going to require a bigger topline to build, man, operate and sustain this required force.”

In his own written responses Brown also backed up Esper’s estimate, though unlike Braithwaite he did not tie the money to any specific goal.

In written responses Brown supported the Air Force’s work on JADC2, pledging to “work with the Secretary of the Air Force to continue innovative efforts that illustrate how we can shape the changing environment, not just react to it.”