Special Ops: ‘Further Behind Than We Know’ On New Tech 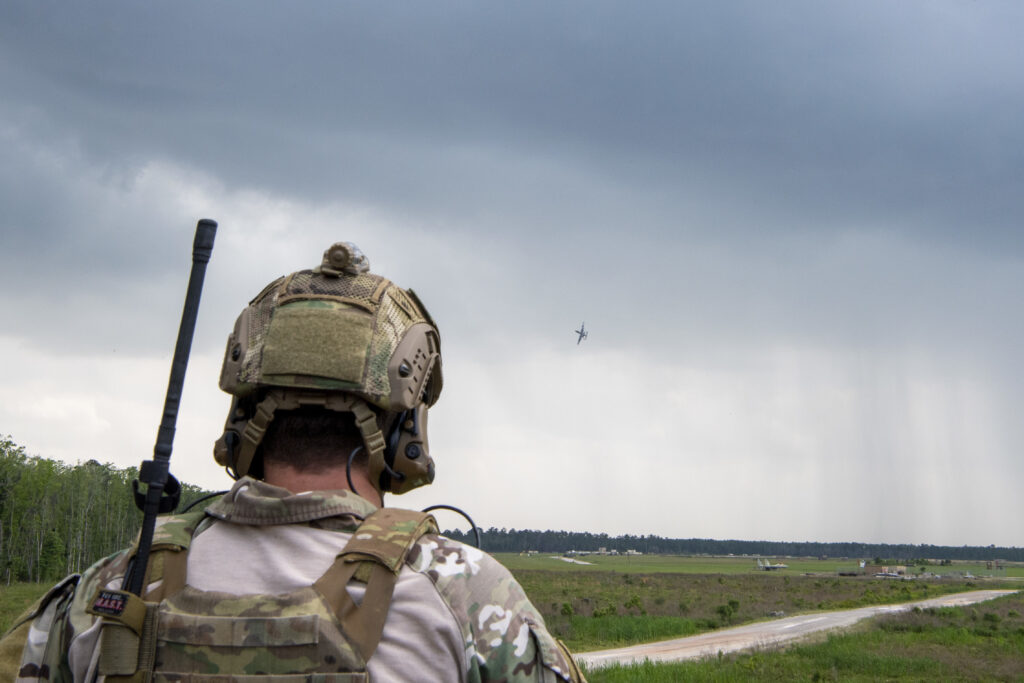 Capt. Daniel Strom communicates with the pilot of an A-10.

WASHINGTON: As commercial communications technologies spin up development of new technologies at a faster clip than government-furnished systems can match, US special operations forces are feeling the coming parity acutely.

“The competitive space is expanding, but we aren’t the only ones expanding it,” Col. Michael McGuire, Special Operations Command’s director of combat development, told a recent special operations conference. In future fights, “we will all have the same tools,” he added. “We need to accept that and leverage the tools we have available…maybe we are further behind than we know.”

The annual SOFIC conference, held every May in Tampa for the defense industry and Special Operations Command to rub shoulders and talk bluntly about modernization priorities, is always a conversation about threats and the art of the possible. This year however, it was notable that comments like McGuire’s carried the day. While the event was held virtually this year due to COVID-19 concerns, a palpable sense of wariness hung over the talks, as the Pentagon grapples with the assessment that America’s adversaries are catching up.

“We had owned the air, space and the [electronic warfare] spectrum,” said SOCOM acquisition chief James Smith. “I would argue that has already turned. We are in a contested environment, where we have to fight for airspace [and] EW spectrum. It’s contested.”

The ability to communicate and push data between operators in the field and command posts hundreds or thousands of miles away — and do it quickly — emerged as one of the themes of the event, with obvious concern over advanced jamming and hacking capabilities of the Chinese, Russians, and even Iranians.

“In today’s highly digitized world, with cyberattacks and information warfare, I believe C4 is more important now than it ever has been,” said Deborah Woods, who leads the Special Operations Command’s command, control, communications and computers office. “From a C4 perspective, competition in our space means having the ability to communicate – whether in a congested [environment] where we’re stepping all over each other, or we have a reduced frequency spectrum, or if obfuscation is being employed,” Woods said.

While some of the harder problems that operators will have to work through in the field have been identified, finding solutions to this high-tech traffic jam is something that SOCOM is focused on intently. Keeping SOF teams relatively safe in the shadows and shielding them from the glare of electronic snooping has emerged as a critical component of planning for current and future operations.

“Key to these digital modernization efforts is getting after human-to-machine, machine-to-human, and increasingly, machine-to-machine interfaces,” said Lisa Costa, the command’s chief information officer. The work is focused on four elements in particular, Costa said. Mobility, information discovery, cyber dominance, and quickly operationalizing innovation. “We want systems that can machine read and write at the speed of the battlespace.”

Col. Chuck Daly, SOCOM’s head of communications systems programs, suggested that in order to have these capabilities, “high through-put satellite technology becomes important. How do we provide that is certainly a question we have to answer.”

Even with machine learning and artificial intelligence being applied to data collection, analysis and dissemination, special ops leaders want to do more than just crunch through reams of ancillary information and white noise. Getting focused and useful information to operators in the field, in a way they can best work with it, is the key.

“Having all the data in the world doesn’t matter to me as much as having the right data that I can turn to, and have it on a screen or heads-up display that I can interpret in the rain, in the dark and while being shot at, and take the right action,” McGuire said.