Long after bullets stop flying and soldiers return home, the deadly remains of wars linger in the soil as landmines and dangerous explosives. Men, women, and children living in war-torn countries cannot farm their land, walk to school, or play in playgrounds due to fear of these hidden killers. By sniffing out the explosive odors in landmines, the Marshall Legacy Institute's Mine Detection Dogs are able to save thousands of lives and limbs by returning the land back to the people for its safe and productive use.

Leonardo DRS is proud to support the Marshall Legacy Institute and their pursuit of alleviating suffering and promoting hope, growth and stability in war-torn countries. Therefore Leonardo DRS has announced the sponsorship of a Mine Detection Dog to aid MLI in their mission. See below to learn more about MLI and the Mine Detection Dog Partnership Program. 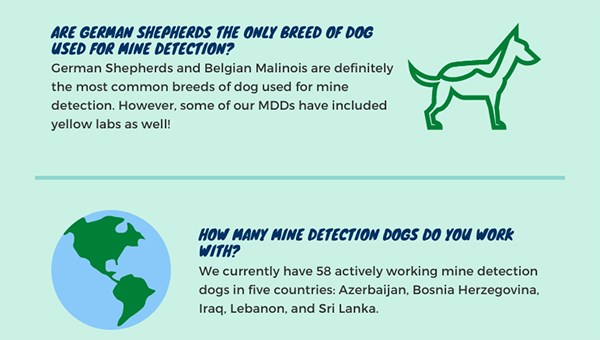 Get answers to the most commonly asked questions about MLI's mine detection dogs.

Images of the mine detection dogs in the field and being trained. 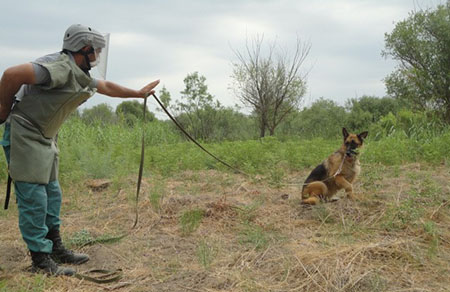 The Marshall Legacy Institute (MLI) was founded in 1997 with the mission to locate, secure, and apply skills and resources to alleviate suffering, restore hope, and create conditions that nurture stability in countries affected by conflict. For many years, MLI has developed Mine Action programs that work to combat the deadly legacy of landmines which can halt agricultural production, impede economic growth, slow the return of refugees, instill fear, and kill and maim innocent citizens on a daily basis, injuring or killing at least one person every 40 minutes. MLI’s longest running program is the Mine Detection Dog Partnership Program (MDDPP). Through the MDDPP, MLI provides highly-trained mine detection dogs (MDDs) and explosive detection dogs (EDDs) to mine affected countries and trains local handlers. The bond between dog and handler is essential to the effectiveness of our MDD and EDD teams in the field. MLI’s partners in Azerbaijan shared this story of the relationship between MDD Rocket and his handler:

“The relationship between Rocket and handler Vahid is remarkable. Their usual daily routine starts early morning, when Vahid take his dog out for a run, and a little pre-work play. Every day, Vahid and Rocket work in boxes to maintain the search capability. In the minefield, they are the best team ever. Vahid has such a great confidence in Rocket, and that trust motivates other mine detection dog teams to work harder and build such a relationship. Vahid loves his dog so much and takes good care of him, and Rocket returns that love by being his best friend.”

On November 9, 2020, a tripartite peace agreement between Armenia, Azerbaijan, and Russia ended the 44-day Second Karabakh War between Armenia and Azerbaijan. In this agreement, Azerbaijan gained control of the Nagorno-Karabakh region, which is heavily contaminated with landmines as a result of decades of conflict. The recent mine action assessment mission that the United Nations Development Program (UNDP) and the United Nations Mine Action Service (UNMAS) undertook jointly in the newly liberated territories concluded that Azerbaijan is facing “a new, large and complex explosive ordinance threat”. Idris Ismayilov, who leads the Nagorno-Karabakh demining operation at the Azerbaijan National Agency for Mine Action (ANAMA), stated in November that it will likely take up to 10 years to completely demine the region. To date, MLI has donated 36 MDDs and 4 EDDs to Azerbaijan that have helped ANAMA search over 29.5 million square meters of mine-contaminated land. ANAMA has requested MLI’s support (and additional dogs) in the massive effort to demine Nagorno-Karabakh and other mine-affected areas. MLI’s MDDs will increase ANAMA’s capacity to safely and effectively clear mine-affected land and enable displaced people to return home and live free without the fear of mines. 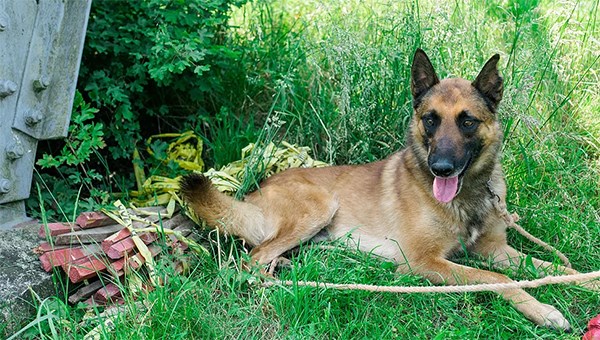 Want to do more?

Help make the world a better and safer place for children to play, people to work, and communities to grow without fear of landmines. 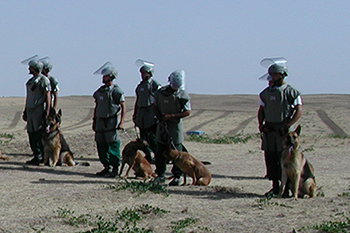