From the Warfighter’s Perspective…

October 2019 -- As modernization becomes a greater imperative in today’s military, who better to talk to about how essential new technologies and capabilities are than someone who has their finger on the pulse of the warfighter’s needs in the field, Al Mosher.

Al is a 26-year veteran of the U.S. Army, graduating from West Point, and retiring with the rank of colonel. He has earned numerous distinguished service, meritorious, and achievement awards throughout his military career including receiving the U.S. Army Europe and 7th Army Gen. Douglas MacArthur Leadership Award twice. Mosher commanded the 1st Battalion, 66th Armor, 4th Infantry division during the Army Force XXI initiative. His unit was one of the first battalions in the U.S. Army to be equipped with situational awareness (SA), command and control (C2), and blue force tracking (BFT) systems.

Post-retirement, Mosher joined Leonardo DRS and has held several senior positions in business development and strategy for the situational awareness and network computing lines of business. In his current capacity as senior director of international strategy for Leonardo DRS Land Electronics, he concentrates on international joint and coalition battle management and mission command capabilities, applying his broad military experience and unique user’s perspective in defining the next generation of C4ISR and battlefield digitization capabilities and products.

Al currently serves on the Board for the U.S. Cavalry and Armor Association and was recently knighted with the prestigious Order of St. George Gold Medallion from the Cavalry and Armor Association. The award program was introduced to honor the outstanding service of those who have built exceptional military careers and have given and continue to give generously of their time and resources to the Army and Armor communities. I had the honor of sitting down with Al, and here’s what he had to say about what the warfighter’s needs when it comes to modernization:

Q: From the warfighter’s perspective, what are the modernization priorities of today?

A: I think given that we're looking at specifically cavalry and armor units, I would say some important things for Armored Brigade Combat Teams (ABCTs) and the components that work within them; the combined arms battalion, squadrons, typically at the tactical level of war, I think the emerging issues that they must contend with under multi-domain battle are C4I challenges, counter-UAB, and UAS challenges, air defense, electronic warfare and countering defense of long-range artillery as well the combined effects of all of these challenges. These are really some of the evolving things that are challenging ABCTs today.

Q: Where is it that warfighters need new technologies and capabilities the most?

A: I think some of the key technologies and capabilities that the Army is looking at now, and are correctly focused on, are improving C4I capabilities, ___ modernization, countering UAV and UAS,  improving air defense at a tactical level, the ABCT combined arms battalion and squadron level, electronic warfare, and becoming more survivable and all those areas.

Q: Where do you think the biggest challenges are from a mission perspective?

A: All of these areas come with important challenges, but I think one of the key challenges is C4I, in one respect, it could be a quick win for the Army. In terms of helping command posts and folks that are at a brigade combat team level and your firearms battalion or squadron level, making those command posts become survivable and more mobile is a major challenge. Currently, our command posts are mired in tents and a lot of folks think that think we need to rid of these because it's essentially an anchor, and it really poses a force protection issue for whatever formation has to implant these highly immobile command posts. One of the ways to meet the needs of all those command posts to be smaller and more mobile is to reduce their power requirements. One way of doing that is using rugged, emerging technology like onboard vehicle power (OBVP) where you can downsize the number of capital generators that you’re dragging, avoid the addition of trailers and actually have that vehicle as a foundation to provide that power for you. In this case for the command post, but that also could be true for medical aid, mobile medical aid, that can be true for _____ radiation that could be true for fire direction centers and air defense batteries that have huge generating requirements that they typically have to tow around. So, that would be one way to make them much smaller, improve their mobility, improve their set-up time, and their teardown time so that can move, in the long run, it will improve the survivability process and even make it harder for an enemy to detect.

Q: What are the gaps that the industry can fill?

A: I think the key gap is that we have yet to reduce the size and improve the mobility of the command post. Again, this includes all of those trailers that drag generators around so by including onboard vehicle power (OBVP) on a vehicle or the vehicle vitals it creates a power for you not just on the vehicle itself, but power that can be exported off the vehicle. I think that's a tremendous gap. The other gap that has been married to that, is decreasing the size of mission packages, in the case of a command post. For mission packages, it has historically been that every capability has its own computer. Intelligence had a computer, logistics had computers to run operations, the operators had computers – now we need to downsize and converge all of that. Instead of having six different boxes we have just one box can do all the work. That reduces your size, weight, and power required, and allows you to put other things that you may want on that mission vehicle. It leaves more room for ammunition, more room for water, more room for other things of equal necessity that the crew or individual warfighters may need instead of packing in all kinds of displays and different computer packages. Reducing the size and the number of computing requirements and displays, coupled with improving how we produce power can greatly fill those gaps that are out there that creates a lack of mobility for our command posts and make them difficult to displace under fire.

Q: Can you talk a little bit about the term “overmatching”, where that came from, and how it's developed over the years?

A: Overmatching has always been a thing throughout history, but we used different terms in the past. Folks might have used the term “masking effects” or “greater range” or being able to “out-range your opponent”. So overmatching is being able to mask effects or having greater range than your opponent in whatever areas you're talking about. Possibly one of the shortcomings that the Army's focusing on how to get overmatching, is in a dismounted area. We do a pretty good job in the mounted area and aviation, being able to mask effect and overmatch our opponents. In an urban environment, we aren’t doing as well for the dismounted Soldier. I think there's a gap where the Army's looking at how can we help the dismounted soldier get overmatched abilities against his dismounted opponent, particularly in built-up and urban areas.

Q: Why is it important to invest in these new technologies for the warfighter?

A: Everything is constantly improving, so there has to be some amount of investment done in new technologies. There has got to be some sort of cost level investment and improvement in positioning of the capability area to be successful. It gives the Army's commanders the option to rapidly make improvements as things change, as you enter a new environment, where the situation may not be quite what you thought it was. If we don’t have up-to-date technologies in place across all of the programs, machinery, and systems that we need to do our job, we’re already behind before the conflict even arises. These investments allow us to adjust and pivot on-demand, more rapidly than our opponent.

Q: It sounds like we're sending our best out there, but not properly equipping them. How can we combat this?

A: I don’t know if we ever have the exact piece of equipment we want when going into a fight, I think one of the key things to help mitigate that is by preparing our warfighters with the best equipment available. There's never a silver bullet, or the exact weapon, or something that will be the solution for every conflict in a combined arms environment. For all future investments and evolvements for that matter, the decisions will need to be made at a tactical level, as opposed to strategic and operational levels.

Q: Do you have anything else to add in regards to the importance of innovation and modernization?

A: I think the only thing I would add that we haven't talked about is under that theme of improving, we have some focus on our brigade combat teams and that the Army is procuring the armored multi-purpose vehicle (AMPV). So, one version of the AMPV is going to be part of the C4I mobile command post brigade combat team and combined arms battalion squadrons. In addition to that notion of OBVP being on the vehicle and having convergence for our rugged computing and displays, there are some key things that happen also to account for things that are you know, rapidly moving cut the logical wise. One of those is short position navigation and timing. Currently, we take it for granted and you're going to get a GPS signal to tell us where we are on the globe and that signal may not be assured in the future. Our satellites may be interfered with, the ground station may be interfered with, and so I think the Army's moving the right direction and looking at sure position navigation timing. We need to put that down at the lowest tactical level on our combat vehicles and in our command post so that they've got a way to assure that position navigation timing all the time, particularly in a ___ environment.

I think the last thing I'd add is that investments also need to be made in artificial intelligence (AI).  There’s a lot of discussion about artificial intelligence and I think some work is being done with this already, but in some ways, it needs to be accelerated completely by addressing it on the tactical level and considering AI in the tactical decision making. There's been a lot of talk over the past probably 10, 15, 20 years or so on how the computing capability onboard a vehicle can enable the Commander to make faster tactical decisions. Something as simple as how to choose a route in the terrain in front of you, you know that you have an aide to quickly analyze it, give you some options: the best weather conditions as an example. So, I think that's another area where the industry can help the Army improve and accelerate. Investments in AI, tied to assure position navigation and timing, coupled with the need for a more survivable mobile command post could really give us an edge.

The ‘Kinetic Pendulum’: How the Army wants to defeat drone threats
Breaking News 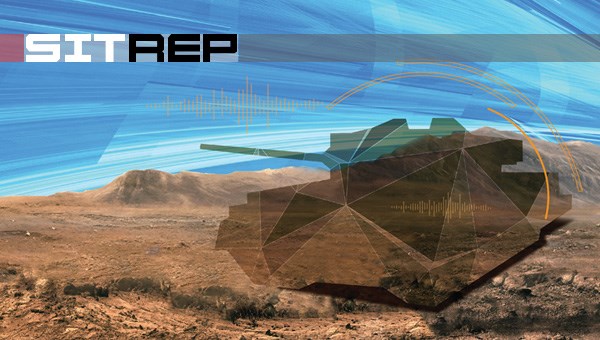 SITREP is the source for information on the latest technologies and innovative thinking in support of the defense industry.